Texas Rollergirls: A Decade of Aggression 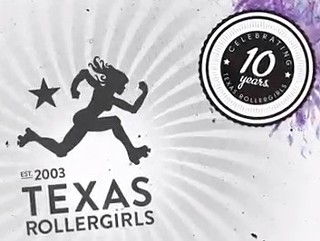 2003: The Texas Rollergirls are formed.

Re-running last year's nail-biting season closer, at 6pm a new-look Hustlers try to break their losing streak when they face the rising Honky Tonk Heartbreakers. Then at 7.30pm the defending champions, the Hell Marys, try to make it 3-0 over the Hotrod Honeys.

I handicapped this year's teams earlier this week, but all that comes with a big coda. The latest revisions to the Women's Flat Track Derby Association's rules come with two massive changes: An end to the traditional two-whistle start, and no more minor penalties. In footballing terms, that's like dumping the snap and ending five yard penalties. Think about how much that changes the game. Think how much that could blow the doors wide open.

Here's a teaser of what you can expect tonight: