The Faces of Austin's AAPW

I walk into the office and catch a pre-show behind-the-scenes look at America's Academy of Professional Wrestling. One of the wrestlers has a concerned look on his face, asking for advice. "But do you think I should wear the white or gold sunglasses?" Carol Consla considers the question, and I recall something they told me the last time I was there …

"There are some schools that just train wrestlers and don't go into character, so they have to develop it on their own. Here, we get it from the trainers."

Character development is a huge part of professional wrestling; the wrestlers' alter egos create a world for the crowd to escape and tuck pieces of their own personalities into. They also drive the story lines.

We'd like to introduce you to some of the wrestlers who work with the AAPW. But don't peek too far behind the curtain, the mystique must remain. 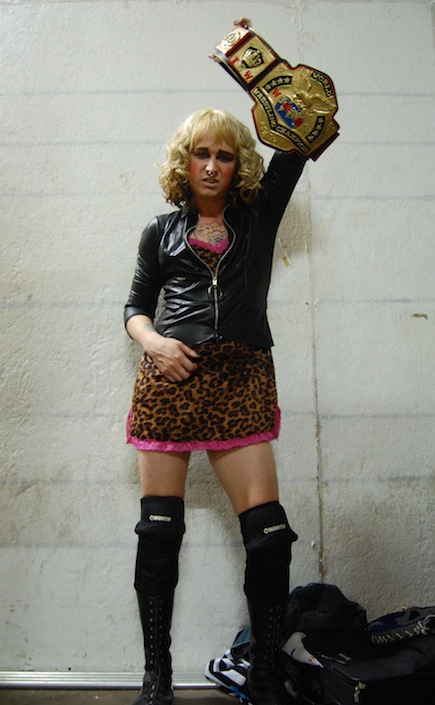 Zane Coxx
Currently the women's champion of AAPW, I asked, "What is your costume supposed to be?" and she promptly replies, "Well actually, no one really knows is the thing."

Ten minutes later she smiles at me and gives my arm a reassuring touch. "Honey, you can say I'm a drag queen. It's fine." "Purgatory," he explains. On his character, he says "People love him because he's a tortured soul and they feel like they can connect to him. But still … be careful for your sins, because he'll put you in purgatory twice." 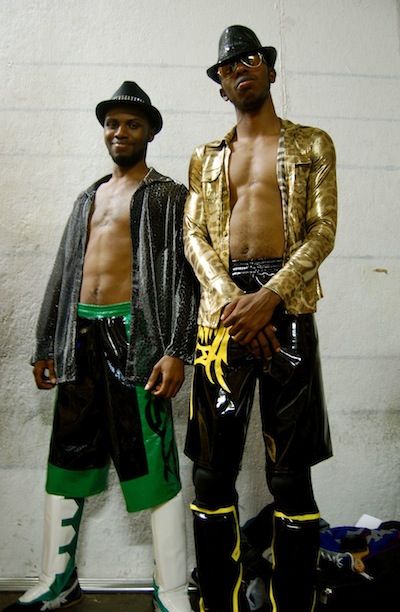 DG Gold and Diamond D (aka Diamond and Gold)
Moving from Miami a mere four months ago, these brothers form a tag-team duo. Always the athletic sort, they found the gym through Craigslist and never looked back. After all, wrestling is something they can use to promote themselves through. Creepers the Clown
This gimmick is art imitating real life. When he's not in the ring, Creepers' disposition changes immensely; he works the light-hearted angle, performing at kids' birthday parties.

"Good gimmicks come out of parts of your life," he says. "It's always best when it comes from something you're connected to. I tried to be jolly in the ring for a while, but it wasn't working. When I started changing it over, I'd shake someone's hand and they'd break into tears and I thought, 'I can work with that.'" Jenna Jynkz
Jynkz is a true sportswoman; she could care less if she wins in the ring, it's all about putting on a good show and using her skills. Well, and one other thing …

"I want destruction in the ring. Jenna Jynkz is a personification of darkness and pure innocence is her mortal enemy." Anubis
Anubis is the Egyptian god of destruction and cremation. To bring this character of ancient lore alive, the man behind the mask speaks Arabic in the ring and stays fast on his feet.

"I'm all Anubis in the ring. I ask to be made strong as the stones." The American Eagle
He was clearly the crowd favorite. I'm unsure if it was the American theme or the fact he sold it so well, but the cheers for him were thunderous. The character has been in AAPW shows for years now, but was just recently handed over and revolutionized.

"A great piece of advice I was given was this: 'You know you've really got the American part down, but you need to be more eagle-y.'" I remember the way he moved through the ring, fluid and flapping. It's clearly working as he's the first American Eagle to travel out of state and wrestle his way to heavyweight champion.