Calling fouls and handing out points on the Roller Derby year 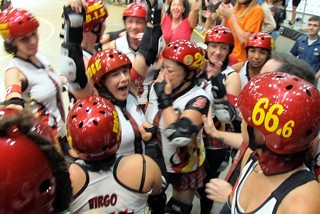 How sweet it is: The Hell Marys take the gold in our number one Flat Track Roller Derby story for 2012 (Photo by Richard Whittaker)

Covering Flat Track Roller Derby makes me feel sort of sorry for reporters who cover more established and establishment sports. After all, beyond shifting box scores and the odd ref strike, it's pretty similar from one season to the next. But flat track? It's in the midst of major, major upheavals.

As the founding mothers of modern derby, the Texas Rollergirls, enter their tenth year, it's amazing and a little scary to think how much the world has changed. The expansion, both national and international, shows no sign of slowing. The lines between the sport's two organizational leaders – the originating Women's Flat Track Derby Association and USA Roller Sports, which takes an ever-keener interest in derby – are becoming more defined and more tense. At the same time, the bonds between the Men's Roller Derby Association and WFTDA are getting stronger, raising the potential for coed collaboration in what was once a women-only sport.

Locally, it's been another crackerjack year for the Texas Rollergirls, with yet more sold-out home games, and a feel-good end to the season that brought tears to everyone's eyes.

So, without further time-outs:

1) Hell Marys? Hell Yeah! Teamwork. That was how the Hells, the perennial bottom of the heap Hells, finally came through with a perfect season to take the Texas Rollergirls championship. Coaches Punk Rock Phil and Dagger Deb were bought in to rebuild from the bearings up, and that's exactly what they achieved: Not by poaching talent, or rewriting the rules, but by using what they had, by nurturing their talent pool, and by creating a team where there was once just a roster.

2) The Gotham Comeback It seemed all year like only a natural disaster could stop New York's finest from taking their second consecutive WFTDA championship. And then Hurricane Sandy hit, and the Gotham Girls hopes looked washed out to sea. Instead, the skaters struggled through, made their way by miracle and donations to Atlanta only days after the storm swept away so much. No-one deserved to win more.

3) The Texas Expansion Yeah, this is Texas Rollergirls country, no doubt about it, but Temple's CenTex Sirens are building up their reputation, while the Rockin' City Rollergirls had their inaugural season. While it may take a while for either to be real competition for the more established Austin league, there's little doubt that having some serious challengers near enough to build both local talent and local rivalries will improve the scene for everyone.

4) No Home to Speak of Back when the touring and tournament season wasn't so grueling, it was easy(ish) to balance home team duties and travel team too. But now the Texecutioners have accepted what many other top flight teams have realized, and are letting skaters be all-star only. So far, only a handful of players are taking the option.

5) Really, Oly? Really? As Stone Cold Steve Austin said, if you're not there to win the title, why are you there at all? That's the nicest way to explain why the Oly Rollers (aka the New York Yankees of flat track) poached three star Arizona Roller Derby players (Joy Collision, Atomatrix and Hockey Honey) just before the tournament transfer deadline, just so they could overload their already powerful bench. There's been some to-and-fro about whether this is just good coaching, sensible tactics, or simply gold-greedy douchiness. Let's just say that not too many people were sad to see them lose to Gotham at nationals.

6) The Big Retirements Every year, the Texas Rollergirls lose a few veterans. But as they enter their second decade, this year's losses were amongst the most impactful and tearful. Virtually every OG skater has gone now, making it a brave and strange new sport for old-school audiences.

7) The Stars of Texas Things weren't always so bright for the Texecutioners. Straight losses across the Star of Texas Bowl weekend (which they hosted. Yeowch.) were offset a little by posting fourth place at WFTDA nationals.

8) Man on the track In 2012, the WFTDA operated its first gender-neutral language rule set. Now, in 2013, for the first time ever, the flat track rule set will be available with the Men's Roller Derby Association logo on the front. That's a tectonic change for a sport that began as a women's only movement.

10) New Rule The latest WFTDA rule update has some significant changes, dumping minor penalties and getting rid of the two whistle start. It's almost impossible to predict what kind of impact this will have on the game: Previous rule shifts have been adopted pretty smoothly, but these could see whole styles of gameplay become redundant.