Horns Lose Finale at Kansas State 42-24, Surprising No One

Texas led midway through third quarter, but fizzled in fourth 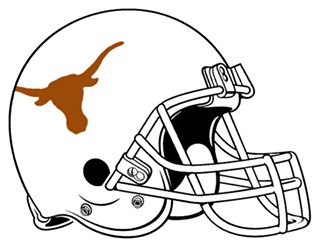 You can’t really fault the effort. The Longhorns played No. 6 Kansas State tough on the road, leading 17-14 in the third quarter, thanks to the play of QB Case McCoy and speed around the edges. But a missed field goal early in the fourth quarter, followed by a fumbled punt by Quandre Diggs after the UT defense forced a three-and-out,

caused a Texas cave-in and a 42-24 loss. The only ways Mack Brown ever beats his good friend, Wildcats coach Bill Snyder, who's now beat almighty Texas five times in a row, is in salary and Pictionary. The Sny can't draw worth a damn.

As they did last year in the season closer against Baylor and Robert Griffin III, Texas basically handed the Heisman trophy to KSU QB Collin Klein, who padded his numbers in the fourth quarter against a worn-out defense. Johnny Manziel, who chose A&M over Texas U. because "Johnny Football" had a nicer ring than "Johnny Coverage," can wait. A Tim Tebow without all that scary charisma, Klein rushed for 104 yards and two TDs, plus threw for 184 yards, including a back-breaking 55-yard strike to a wide open Tyler Lockett that put K-State ahead 28-17 early in the fourth. Klein jabbed, jabbed, jabbed, then connected with the right cross.

McCoy started shakily, tossing a Pick 5.99 to Nigel Malone on his second pass of the game, which had a hang time of 2.7 seconds. Malone, who probably wears a costume on Oct. 30, dropped the leather oval before crossing the goal line, but since the ball didn’t go out of the end zone, KSU got it on the one-foot-line and Klein fell down for the TD on the next play. But it was K-State's only score of the half, as UT's much-maligned linebackers, especially freshman Peter Jinkens, put the klamp on Klein.

Baby Colt settled down with 26-34 for 315 yards and two TDs to match two INTs. Other high points for Texas were long runs by speedsters Daje Johnson and D.J. Monroe, which made the K-State defense look like Eric Stonestreet, the chubby KSU alum who plays gay for pay on "Modern Family," had outside contain. The oft-injured Malcolm Brown proved to be UT’s best running back, with 90 yards of offense, two touchdowns, and key third down conversions.

Texas finished the regular season a mediocre 8-4 and will play Oregon State in the Alamo Bowl on Dec. 29. The Alamo Bowl? Like a dog owned by a homeless man,to paraphrase Norm MacDonald, the Horn players could've done that on their own. When did Texas become Tennessee?

Victories against sometime-ranked conference foes Oklahoma State and Texas Tech, plus a 56-50 win against a surging Baylor and an Ole Miss burning on the road couldn’t save another disappointing season. Poor tackling and inconsistent QB play are what stand out for a 2012 team that put the "duh" in fundamentals. Sadly, the defining game remains the meltdown against Oklahoma, when Texas was as overmatched as Honey Boo Boo at the Scripps Howard Spelling Bee."'Annihilation,' could you use that in a sentence?" Coach Brown is now 21-17 since Colt McCoy’s glass shoulder in the 2009 national championship game. Would Nick Satan still be at Alabama if he averaged 7 wins a season? Where's Phillip Fulmer these days- and can he scooch over and make room in the booth for another ex-nat'l champion coach? The Horns played their hearts out against a K-State team with so much to prove after their downfall at Waco-loo. But our group of blue-chippers proved once again that it doesn't matter how highly your recruiting class is rated; it's where you are in December, not February. Season-ending injuries to DE Jackson Jeffcoat, having an All-American year, and LB Jordan Hicks didn't help. But neither did coaches Bryan Harsin and Manny Diaz. We're so mediocre that a sellout at DKR-Memorial is like an hour wait at Chuy's. It really comes down to this: If you're looking to join the military and you're a total badass, you join the Marines, not the Air Force. And if you're a football player who's more rabid animal than show breed, you commit to Bama or A&M. Not Pamper State in Austin, where raw meat is called tartare.