Put a Fork in Vince Young?

Longhorns hero is unemployed and nearly broke, but can he come back? 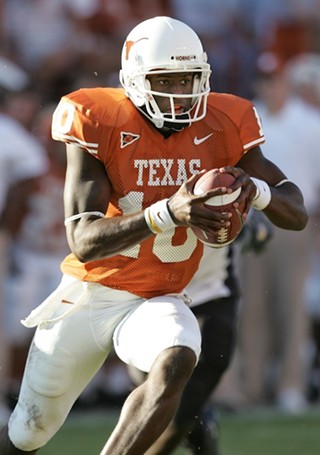 They’re calling him a loser, a bust, a naïve nitwit who blew $50 million during his six years in the NFL on strip clubs and child support and taking his boys out to the Cheesecake Factory.

They’re saying he’s finished, that no team will ever again take a chance on Vincent Immature, even though he’s been named to two Pro Bowls, the latest as recently as 2009.

After being cut by the Buffalo Bills – the Buffalo Bills! – in August, Vince Young is without a job. On a week when Texas exes Justin Tucker and Jamaal Charles won big games for the Baltimore Ravens and the Kansas City Chiefs, respectively, Young made the papers by being broke. Branded a brooder, he’s the big baby that once threw his shoulder pads into the crowd in anger after Tennessee Titans head coach Jeff Fisher wouldn’t put him back in the game. ElVinYo handles adversity about as well as Andy Dick does an open bar.

After a sensational college career, capped by being the hero of the greatest college football game ever played, Vince Young became the first client of a sports agency run by his uncle and a family friend named Major. VY was rewarding those who had his back before he had his name tattooed on it in big block letters.

He was giving back and now he’s trying to get it back. In June, Young filed a suit against agent Major Adams and financial planner Ronnie Peoples, accusing them of misappropriating $5.5 million. Vince claims they forged his signature and impersonated him on the phone and in emails to withdraw money, which Adams and Peoples vigorously deny. “This is a person scrambling helplessly and pointing in all directions to blame others to get out of debt,” Adams’ attorney recently told the Dallas Morning News. One of the withdrawals, Adams said, was to charter a plane after Vince missed the team flight. Accepting responsibility has not been a strong trait for this physical freak coddled by a mother, two sisters and a well-funded state university.

There’s little doubt that Young is a bit of a headcase. Live his life and be well-measured. He’s been signing autographs since Bell Biv Devoe had hits and at Madison High in Houston he was football’s LeBron James. Everybody wanted a piece of him to make their lives better. But the only place that ever truly worked out was on the football field. Does anyone remember 38-37 in the 2005 Rose Bowl against Michigan and 41-38 against USC the next year?

True Longhorn football fans can’t take any delight in the downfall of this overproud and overpaid professional athlete because of what he gave us in January 2006. I have a DVD of that game and I've rewatched it more than the Traci Lords tape I stole from (and later returned to) I Heart Video in 1988. Coach Mack Brown earned his millions that 2005 season by loosening up and letting Vince be Vince. The QB wanted to have fun again and when he did he was the best football player any of us ever saw. If that championship-winning touchdown run on 4th and 9 isn't one of the five greatest moments of your life, well, you can pick up your shoes on the way out.

Too bad Jeff Fisher couldn’t have also put his own ego aside for the good of his team. Young was named the NFL Offensive Rookie of the Year in 2007, but he's been in a funk since 2010, when he was told to hold the clipboard for Kerry Collins. It didn't help that his father figure Steve McNair was shot and killed by his mistress a year earlier.

They say he’ll never come back, but we hope they’re wrong. Given the examples of Pacman Jones, Lawrence Phillips, Todd Marinovich, Ryan Leaf and other trouble men who blew their second chances, it doesn’t look good for VY’s redemption song. He's already beaten the odds by lending his name to a downtown steakhouse that's actually quite good. Maybe he could do it again.

We still have the 2004 and 2005 seasons. Nobody can default on those memories. But it's tough out there in the NFL, where it's more important to prove a point (Bountygate, replacement refs) than to be fair. I could have told you, Vincent. This world was never meant for one as beautiful as you.