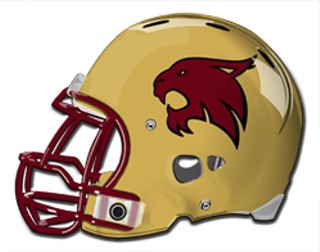 The technicolor dream bus has finally arrived in San Marcos. The stadium has been expanded to 30,000 seats. The Texas State Bobcats will compete at the Football Bowl Subdivision for the first time this Saturday, putting them at a semi-even playing field with those big shots at the University of Texas.

Early '90s Coach Dennis Franchione is back in town after stops at Texas A&M and Alabama. A one-year stint in the Western Athletic Conference awaits, followed by a limbo over to the Sun Belt Conference in 2013.

To fully grasp the childlike joy of this moment for Bobcat fans, you had to have been there.

For the two glorious years in the 1980s, the school that shall forever be known as Southwest Texas State University was bedlam. Not one, but two football national championships with grinning Coach Jim Wacker at the wheel of a crazy cruise ship of Division II entertainment: champs in '81, undefeated champs in '82. The Party School by the River was amped up tighter than the crowd at Cheatham Street Warehouse happy hour when the legal drinking age was 18. Take note that the Bobcats did it by hacking their way through a playoff system and winning it all in the Palm Bowl. "Unbelievable!" became the Wacker catchphrase.

Then Wacker vamoosed to TCU where in 1985 he took the moral high ground and kicked Heisman candidate Kenneth Davis off the team for taking payoffs. It left Wacker's career stillborn, but cemented his legend. Meanwhile back in San Marcos, the football program fell asleep.

In the late '90s, I went to Hula Hut in Austin for a Bobcat football preview after learning Wacker was back as athletic director with dreams of bringing Bobcat football, which had drooped into mediocrity, back to the top. He was the same friendly, goofy, tall, charismatic man of legend. We chatted a bit and he introduced me to then new Head Coach Bob DeBesse, a former Bobcat who was a grad assistant on Wacker's two championship teams and coached for him at TCU and later at Minnesota. I didn't know Wacker was already sick with cancer. He died in 2003 with his dream unfulfilled.

But the arrival of Barrick Nealy, a University of Houston transfer with a bum knee gave new hope. In 2005, Nealy mirrored what Vince Young was doing down the road at the University of Texas by producing hard-fought comebacks. The Bobcats almost – should have, could have – knocked off Texas A&M at Kyle Field then pushed their way through to an improbable Southland Conference title and two straight playoff victories, including a come-from-behind win over Georgia Southern which saw Neely pass for 400 yards and four touchdowns while galloping for 126 yards and another score. In the semifinal game, Coach David Bailiff, who had played on those '80s Bobcat championship teams, found his team tied with Northern Iowa with a minute and half to go in regulation. He told Nealy to take a knee and let the clock run out. The Bobcats would pin their hopes on overtime to secure a spot in the championship game. Northern Iowa was held to a field goal, but a Nealy pass was intercepted. Cue curtain. Slash dreams. Make new plans. Send Nealy on his way to the NFL, CFL, and now to the San Marcos Baptist Academy to coach.

That's it, the short version of where the school that now calls itself Texas State stands as it goes into this weird cotton-candy season in a dying conference, its first in big-time football facing Neely's former gang at the University of Houston, where their red-hot coach Kevin Sumlin has skedaddled to Texas A&M and NCAA all-time passing leader Case Keenum is an NFL Rookie for the Houston Texans. Is that an opening for an upset?

Probably not, but Wacker-backers still dream big. The Cougars are doing their own conference musical chairs next year from Conference USA to the Big East. New Coach Tony Levine got his coaching start in 1997 as a graduate assistant in San Marcos under DeBesse, where Levine paid $150 a month to rent a deathly quiet apartment at Pennington Funeral Home.

On paper, U of H and Texas State have a lot in common: both are largely commuter schools with huge overall enrollment. Houston is the third largest Texas school with almost 40,000 students, while Texas State is fifth and closing in on 35,000 students (larger than Texas Tech and two and half times Baylor). Houston teaches hotel management at an on-campus hotel and has a large international student body. Texas State has lots of lovely student bodies sunning at Sewell Park who are likely majoring in education or business.

Both have football histories, too, and get less credit than they deserve. Of course, Houston's history of success is more recent – as in last year when the Cougs won 13 games and narrowly missed a BCS berth – and it will likely show on the playing field Saturday. It comes down to whether the Bobcats' running game led by senior Marcus Curry – a Navy transfer – and sophomore Terrence Franks can find holes. The pair combined for 15 touchdowns and more than 1,500 yards last year. Of the dual Texas State QB option attack, senior Shaun Rutherford's legs are a larger threat while junior Tyler Arndt is trying to prove his surgically rebuilt knee can keep him in the game. The secret weapon may be tight end Chase Harper, for both his blocking and pass catching. He's on the Mackey Award watch list for top tight end in the country.

But Texas State's defense was pitiful last year, particularly at rushing the passer. Linebackers are green, but the secondary is at least experienced. Fortunately for them, Keenum is gone, but David Piland should be an adequate replacement at Coug QB. The real Houston threat may come from ball carrier Charles Sims, who catches a few passes, too.

Hey, Texas State returns 17 starters. That's got to count for something, right? The truth is the Bobcats, who went 6-6 last year, will be lucky to break even this season. But the door is wide open to big-time football, and it will be nothing if not starry-eyed entertaining. Next week Texas Tech comes to San Marcos. Then there's Nevada, which already fled the WAC, which also lost Boise State, Fresno State, and Hawaii. (A road trip I was ready to take!) Texas State will play the other remaining six conference teams, including UTSA, which had never, ever played a down of football before last season.

It will be fun, sloppy, with incredibly raucous parking lot tailgating in San Marcos, and the Bobcats just might prove to once again be unbelievable! If we learned anything from Coach Wacker it's to keep the dreams big. Play ball.