There are four flat track Roller Derby teams playing at the Star of Texas Bowl this weekend, and the B.ay A.rea D.erby Girls are the only one not top of their region. But that doesn't make them any less of a threat.

No offense to the San Fran thrillers, but the gold-helmeted brute squad has always played like the LA Raiders of old: Even if you beat them, you'll know by the bruises that you've been in a bout.

And not many people are beating the 2012 All-Star travel squad. Putting a year-opening loss to Denver behind them, they've crushed two of the toughest teams in the Women's Flat Track Derby Association's Western region – Rat City and Rocky Mountain – plus South-Central silver medalists Kansas City.

They'll be closing out the first day of the tournament taking on the home town Texecutioners, but before then Coach Miss Moxie talked to us about why they'll be keeping an eye on Texas, scrum-style starts, and why the West looks so dominant.

Austin Chronicle: B.A.D. hosted the Golden Bowl last year, with two of the three teams – Windy City Rollers and the Texecutioners – you'll be facing this weekend: What were the big takeaways from that experience?

Miss Moxxxie: Well, we handed Texas their biggest loss ever in front of our home crowd last year, so we know they're going to be looking for payback this weekend. Obviously, like every team in this tournament, they are not to be underestimated!

AC: Like Windy, you've had a big turnover from the 2011 roster heading into 2012, but still have some nationally recognized players like Demanda. How's the 2012 season shaping up, especially with this new bench?

MM: So far, our 2012 season has been extremely successful. We've welcomed some incredible talent to the team and feel fortunate to have the most positive, hardworking group to ever don golden helmets. We've built up a lot of momentum coming into the Star of Texas Bowl and are working to carry that into WFTDA playoff season.

AC: There's been a lot of discussion recently about scrum starts, and how they're changing the game, potentially moving things away from 'pocket jammers' to a more brawly, muscular style. How's B.A.D. adapting to that?

MM: While we don't necessarily love the scrum start, we know it's a part of the strategic game we have to be able to master in order to stay competitive with other highly-ranked teams. So we've embraced the scrum and practice it as much as we do anything else. That being said, our favorite game is the one the fans love to see: fast, hard-hitting and graceful.

AC: As WFTDA champs and heading to a 23 game winning streak, the Gotham Girls come in as the team to beat: What's more important, winning the bowl or breaking their streak?

MM: To us, neither winning the bowl nor breaking Gotham's winning streak are important. They're nice little bonuses to what we consider our real goals: Staying focused, playing as a team, for our team, one jam at a time. If we can achieve that, as head coach G$ likes to say, "The score will take care of itself".

AC: The Western region has a reputation as the toughest in the WFTDA: Where do you think that comes from? 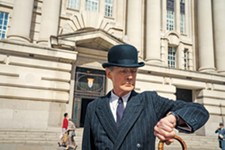