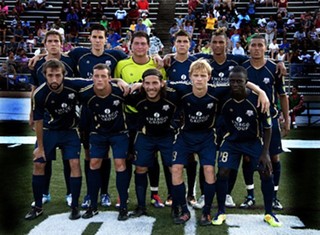 The Austin Aztex's home finale is tonight, 7:30pm, at House Park, hosting the West Texas Sockers. They're hoping for a big send-off before heading out on the road for the last two games of the season. A playoff spot, and possible division championship, is on the line.

The Aztex are in a three-team dogfight with the Laredo Heat and El Paso Patriots for the PDL Mid South's two playoff spots. They didn't get much help from other results on July 4, as El Paso won on the road, 4-1, over tonight's opponent West Texas, and Laredo moved into first place with a home draw against New Orleans. So with three games left in the season, the Aztex are a point behind Laredo in second place in the division, and a game ahead of third-place El Paso – who nonetheless control their own destiny because, in this final week, they host both of the teams ahead of them in the standings.

Whatever happens tonight, the Aztex face a long trip tomorrow, and a huge game Sunday in El Paso, where a win would clinch a playoff spot for the Aztex, while a draw or loss would give the edge to the Patriots, who currently hold the tiebreaker should the two finish tied in the standings because they've beaten Austin twice in three meetings so far. (An Aztex win, though, would even the season series, and the Aztex would own the tiebreaker on greater goal differential.)