Aztex edge Laredo, 1-0; head out on the road 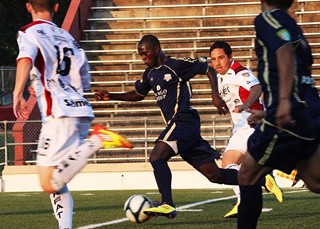 Kekuta Manneh in action against Laredo (by Kathleen Pait)

The Austin Aztex got a key win Friday night at House Park, knocking off the first-place Laredo Heat, 1-0 on a goal by Kekuta Manneh, to break a five-game winless streak, and stay even with the El Paso Patriots in second place in the USL PDL Mid South.

It was a pretty evenly played game, though Laredo had the majority of possession after Aztex took the lead halfway through the first half. Austin goalkeeper Devin Cook was tested repeatedly, and made at least a couple of fully stretched-out diving saves. For the most part, though, the Aztex defense and midfield kept the game in front of them, and created their share of scoring chances for the strike squad. The lone goal was a thing of individual beauty: Sprung open through the middle, Manneh barely managed to dance around the goalkeeper by going far to the outside, then had to slot the ball in from an extreme angle on the left side. Nice.

Now the Aztex go into the rough endgame of their PDL season: After their recent stretch of seven home games, with just one trip to Laredo in between, the Aztex now go on the road – way out on the road – for four of their last five games: at Laredo the day after tomorrow, Wednesday, then in New Orleans three days later. Then they're at home the next Friday night, but all the way off in El Paso Sunday, before heading 1,100 miles the other direction, back to New Orleans for the season finale on Saturday, July 14.

If Google is telling me the truth, the Aztex will travel some 3,584 miles to play five games over the next two and a half weeks; it'll be a test for the team, coaches, and staff alike.

And out of all of that, there's just the one home game left for local fans to come out and see the 2012 Aztex, and try to give them our support in the stretch run: Friday, July 6, 7:30pm at House Park, hosting West Texas.