Rosey Times for the Texecutioners 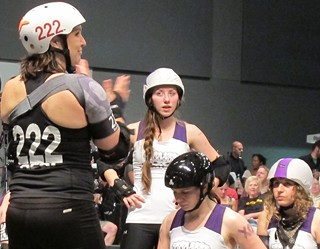 The Texas Rollergirls had a lot to celebrate for their mid-May match. It was the debut for the new Firing Squad B-team, and the first home bout in new uniforms for the headlining Texecutioners. But when they hit the track, they just couldn't quite knock the bloom off Portland's Rose City Rollers.

History lesson: Just under a year ago, Texas took a road trip to the West Coast, and it was a rough time, with three losses in a row. Rose City, 79-105; Rat City, 131-147; And Oly, 184-93. Now there's a good case that the Women's Flat Track Derby Association's Western Region is the most competitive, so no-one expected an easy ride, but the loss to Portland was a real wake-up call for Texas. The Texecutioners were hoping there wouldn't be a re-run when they faced the Wheels of Justice this year, but with a 148-117 loss under their belts, Texas is hoping this is just another wake-up call.

For much of the first period, Texas put up its own extremely effective three jammer rotation. However, the two teams were taking very different approaches to scoring. Portland was slow and steady, with only two grand slams in the half hour. Texas was droughts and downpours, and that was enough to go into the second half leading 58-48.

But Texas had made a strategy change that failed to pay dividends in the second period, switching to a two jammer rotation. Bar a couple of appearances by Vicious Van GoGo, and a one-off trip to the jammer line by Short Cut, it was Olivia Shootin' John and Killbox shoring up the point scoring. It was a gamble, and it did not pay off. Portland stuck to what had been working, and turned a slow crawl to points into a runwaway lead.

The Wheels didn't just look good: They looked exceptional, and every team in the WFTDA better start thinking of them as one of the teams to beat. They particularly better start looking for a way to counter Scald Eagle, who throws a lot of conventional thinking about what a jammer should look like. In form and skating form, she probably reminded some veteran Texies fans of retired skater Lady X: Tall, strong, the antithesis of the pocket jammer. She sealed the deal for Portland by taking advantage of two power jams: 30 points while Killbox was cooling her wheels in the penalty box, and another 24 in the closing moments against OJ. (That's probably the biggest danger of a small jammer rotation – minor penalties can rack up fast.) It was only a last moment burst from Vicious, combined with a modified, faster pack, that saw Texas cracking the century.

But it was too late to really break Portland's dominance. They made the entire second period was about no-pack starts and quick calls, and this fast shuffle gave them more opportunities to get fresh legs on the track. A fearsome front wall – usually constructed from a mix of The Blast Unicorn, Havana GoodTime and Heidi Go Seek – made life difficult for Texas, while the home team's blockers kept getting caught in games of kitten in the basket.

The boil down was that Texas looked good, but Portland looked like serious championship contenders. And let's not forget: Taking a good fight to a major West Coast threat last year is part of what pushed Texas to pick up bronze at WFTDA nationals.

It was a similar story of learning curves for the opening bout, as the Firing Squad put on its travel wheels for the first time. Going into this inaugural bout, Firing Squader and veteran former Texecutioner Desi Cration noted that Portland blurs the line between rosters for its A and B teams. Even without that, the Axles of Annihilation are seasoned enough to have an automatic head start over the newly minted Texas second squad. But having a B-team is really a fact of life for a top-tier team these days. Look at the top four ranked leagues in each WFTDA region. With Texas adding the firing squad, and putting the travel-centric Oly to one side, only Rat City, Minnesota, Naptown, and Charm City don't have a second string roster. Hell, Detroit is running three road teams these days, and it's not hurting them.

Of course, going down 203-89 to Portland has to hurt the Firing Squad a little bit, but it's not like they shot themselves in the foot. Having some veteran Texies like Kat A Killzem on board gives them some tactical expertise (plus having the quasi-retired Shank coaching means everyone remembers this is supposed to be fun.) But it was really about the next wave of players, the potential future Texies who need some top tier travel experience under their belt for when slots open up in the A-team. Sinnerfold continued to be one of the season's most improved (or maybe she was always this good, and never got a chance to shine), and Chasing Amy (who impressed me in her rec league days) thrived under pressure. The pack holds promise too, with Vargas Grrl showing her pack general skills, and newcomer Action Jackson coming on like a next generation Crackerjack.

So the score lines may not have gone Texas' way, but it's early days – both in WFTDA championship terms, and in the whole future of the Firing Squad.