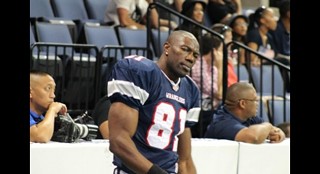 "Missing the event at the children's hospital. That was it. 300 people were there, balloons everywhere. A great event for our team." A source within the Allen Wranglers organization told the Chronicle. "They were there to see T.O. The kids all heard T.O. was coming and it was set to be a great day for our organization. That was it. That's when we were done."

No show. No call. No "Sorry." No explanation. Terrell Owens was always an enigmatic wide receiver in the NFL, but one thing that was never questioned was his work ethic. He has always been known as a workout warrior and a player who set an example for younger players on the practice field.

Off the field, however (and even on it after certain touchdowns), he has always been a nightmare. When no interest was shown from teams in the now broke and aging diva of all WR divas, Owens was cast a life net from the Allen Wranglers, a Dallas-area professional indoor football team who offered T.O. a job as well as an ownership stake in the franchise.

Owens was initially a hit with the fans. "After games, all the players come out and sign autographs, you know, meet and greet for a while. T.O. always had a line 30 minutes long just for a quick autograph. It was fun for the fans."

Owens' play on the field was not so spectacular, though. Through eight games, he had accumulated 420 yards and 10 TDs. This sounds monstrous in NFL terms, but with the 50-yard field the indoor game is played on, and scores that approach 80 points a game, those numbers are not as impressive. I was told that a "better than average" WR in the IFL would likely have closer to 700 yards after eight games played.

Owens had a contract that was different from his teammates in really just two ways. Two absolutely huge ways, though. He didn't have to play road games and he was a part owner of the team.

"No, he was not required to play road games. But this is a team. We're 5-6 and fighting for a playoff spot." The source said, "We have two road games in Nebraska and Seattle coming up that are important, important games. Four teams go to the playoffs and both of these teams are right behind us."

Basically, T.O was given the "you only have to play home games" provision along with ownership as a bit of a check against the possibility he would actually exercise his right to never play in a road game. In case he actually did turn out to be a bad teammate. If he's a part owner, the success of the team, the wins, those are his successes, too. Apparently, this theory that seems perfectly plausible on the surface was lost on Owens.

"If we were coasting into the playoffs, that would be different. It just seems like there was an understanding here, we know he had special circumstances, but at the end of the day - are you part of the team? He's an owner and a player and we are fighting for our lives here."

The Wranglers play away games at Grand Island, Neb., and Seattle before returning to Allen for their home finale at the end of June. It should be an interesting few weeks for the Wranglers, who are currently stocked with talent. Remember a guy named Ramonce Taylor? Our former electric Texas Longhorn is making big waves this season with his dynamic kick return ability, and getting close looks from NFL teams.

Owens has been relieved of all ownership responsibility and equity along with his separation from the club as a player.

"What if T.O. stayed on the team and you guys made the playoffs? Would he still not go on the road?" I asked.

"You know, that is a great question. I never even thought of that. Glad I won't have to now."

[Alex Dunlap (follow on Twitter) is a member of the Pro Football Writers of America, the host of RosterWatch on 104.9FM ESPN Radio Austin, founder of Rosterwatch.com, and a featured expert contributor to the FantasyPros.com network.]