Portland, You Are in Us 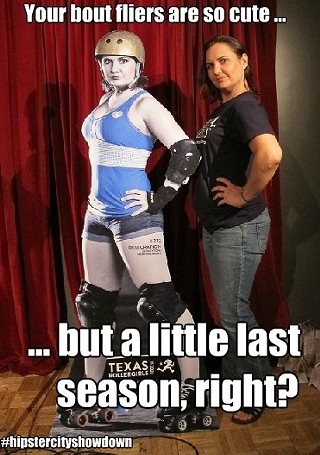 Desi Cration and, er, Desi Cration get ready for the Texas versus Portland Hipster City Showdown (Photo by Richard Whittaker)

Not turning up for flat track Roller Derby? Uh. That's so 2001. The Hipster City Showdown brings Portland's finest to the ATX this weekend, and gives you a chance to see the new Texas B-team, the Firing Squad, before your friends.

The battle of the cooler-than-thous has developed a memetastic, Tumblr-powered life of its own – complete with hashtag. But truth is that the Texas Rollergirls are hoping that #FiringSquad will be trending by the night's end.

Desi Cration is no stranger to the travel team life, having spent time on the Texecutioners before she took a brief leave of maternity absence. Now she's back, and spearheading the veteran talent at the core of the Squad. So no gentle easing back into the sport. "I only have two gears," she said. "On and off. And if it's on, we're going all out."

Texas already has three levels of skating: The traveling Texies, the main league, and the rec league. Like the Texies, the Firing Squad draws from the regular roster. It helps that it's a roster that outguns most leagues on the planet. Desi said, "Some of the girls that are skating have aspirations to skate for the Texecutioners, and others do not. Others just want a chance to skate at a higher level than they do at the home game, or they would like to go out and skate against other teams and this is a great way to do that."

Having a travel team opens up a lot of opportunities, not least showing how good the rest of the Texas roster is. "Everyone knows the Texecutioners are number three in the world," said Desi, "but we just want to show how deep that talent goes." Of course, there's a downside to the Texies being so good: A lot of up-and-coming leagues can get a little gun shy about facing the best team in the Women's Flat Track Derby Association's south central region. That's a tough one for Texas, which has always had a reputation for working with newer leagues and helping them get established in the sport. The Firing Squad is already hearing from leagues that want to have a more competitive bout, "so that'll be a great opportunity to send our B-team," said Desi.

The Firing Squad faces a tough challenge in their first bouts, going up against Portland's more established Axles of Annihilation. Skilled as they are on their regular teams, this new lineup has only been practicing together for six weeks. "It hasn't been a very long time frame," Desi said, "So we've spent a long time gelling and getting used to playing with each other. We're very used to playing against each other, so it's now a coming together and a meeting of the minds."

So what does Desi make of the Axles? She said, "Having them being around for a while, they'll have gotten used to playing with each other, so they'll have a little bit of an edge up on that. But never, ever, ever underestimate a Texas Rollergirl."