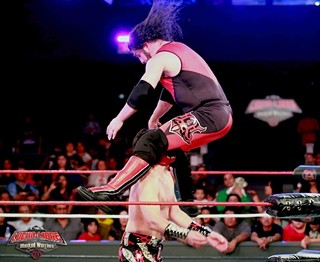 This ain’t your pappy’s wrasslin’. Y esta no es la Lucha Libre de tu papi. It’s both – together – in a whole new league.

In seeking new American fans, Lucha Libre USA aims to put their own twist on Mexico’s second-most-popular sport. By throwing American pro-wrestlers in the ring alongside luchadores from Mexico, their brand is attracting a lot of attention.

Their country-wide Masked Warriors tour lands in the Austin area tonight, with a live event at the Dell Diamond, and fans that attend will be actively encouraged to participate in the action.

“We like to say it’s like The Rocky Horror Picture Show, where you’re a part of the show,” explained Alex Abrahantes, the company’s VP of creative direction. “People arrive thinking they are going to see a great night of in-ring wrestling action – and then they realize, ‘wow - this is just a great event for everybody.’” Before you have visions of jumping in the ring and battling Jack Black, realize that Alex’s ideas of audience participation are a bit safer than that.

Arrive early, for instance, to get in on the preparty dance contest, led by Mini-Park, the league’s most popular little person athlete (or “mini-star” in Lucha Libre USA-speak). Bring your own mask, cape, and more and compete for the best-dressed fan award during the show. Drink plenty of hot tea with lemons to prepare your vocal cords for the rowdiest fan contest, and of course, save up your wittiest lines for the best sign contest (sign making stations provided!). Of course, don’t let the midnight cult movie reference keep you from bringing the kids – the entire event is billed as family friendly fun.

A New Era in Pro-Wrestling

The young circuit has already amassed some heavy-hitting credentials. In addition to past broadcasts on MTV2, the Masked Warriors English-language show airs weekly on TVs in multiple countries. Austin fans have been tuning into Azteca America, Channel 14/20, every Saturday for three seasons. Now, some well-known American pro-wrestling stars, including Jillian Hall, Chavo Guerrero, and Gregory Shane Helms, have migrated from the WWE and WCW to try their hand at the more acrobatic version of their sport.

“One of the things that made me stand out in the WWE was that I was one of the few guys that had a mask.” Helms, one of the longest continuous cruiser weight champions of all time and once a top rival of The Rock, explains that he has always had ties to his south-of-the-border colleagues. Though Helms is from North Carolina and has no family ties to Mexico, lucha libre fans have told him that they followed him in the WWE and WCW. It seems that his popularity as a masked American wrestler made him an unwitting representative of their own country, and he doesn’t mind that at all. “I’m in a very unique situation. I didn’t start with a mask on – that happened during my career in American wrestling – but people love the mask. And I love giving them what they want. I think it’s great.”

Meanwhile, the league has been sure to stay true to its roots. In Mexico, lucha libre has long been a cultural phenomenon. More than just mindless bodies flying around a ring, the sport features “rudos," the evil and ruthless villains, fighting “technicos." the virtuous heroes, in storylines that often echo well-known folklore and historical stories alike. Lucha Libre USA hasn’t missed a beat there either, creating a now infamous rudo named RJ Brewer. American fans may wonder why they find that name familiar, until they hear him talk. When he grabs the microphone (and he needs one to drown out the boos), he spends most of his time touting Arizona’s Senate Bill 1070. The bill, which made international headlines for its broad and strict anti-illegal-immigration measures, was signed by Arizona Governor Jan Brewer - RJ’s supposed mother. The character’s speeches and stories have drawn immense amounts of attention for the league, but for anti-SB-1070 fans they have also provided a safe and entertaining venue for some good old fashioned catharsis.

Not everything is new and “Americanized” though. In Mexico, names like Latin Lover and Lizmark Jr. are big draws. The former is a popular actor and the winner of Bailando por un Sueno, a Mexican TV show similar to Dancing With the Stars. The latter is the son of one of lucha libre’s most popular luchadores, Lizmark. “I want to continue the legacy of my father. For us, it is more than just a sport, more than wrestling. It is a culture and a lifestyle that has been passed down from generation to generation. I want to continue the legacy of my father, to represent my father’s mask, and his career of over thirty years, and some day pass this on to my sons.”

Tonight at the Dell, Abrahantes hopes Lizmark Jr will share his high-flying brand of wrestling with more than just his family. “We really do have something for everybody. For Austin, this is really an opportunity to see the greatest lucha libre around, period.”

Helpful Chronicle readers are implored to post Spanish-translations of “Time Warp” in the comments section. We refuse to be the embarrassed noobs sitting in the back row silently while everyone else has fun.