What You Know About Them Texas Boys? 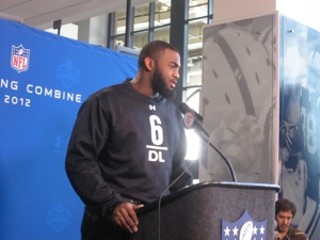 Michael Brockers at the Combine (Photo by Alex Dunlap)

They played under the Friday night lights, and now they are headed to the big time. These are the Top 5 former Texas High School players who were taken in this weekend’s NFL Draft.

Andrew Luck, QB (Stanford, Houston Stratford)
Pick 1 (Indianapolis Colts)
Scouting Notes: We’ve had a pretty good idea since last April who the first pick in the 2012 Draft would be. Luck is a prototypical pro-style passer who has been NFL-ready for two seasons. The brain, the arm, and the intangible qualities are impossible to overlook, but sometimes we forget that Luck is an extremely (almost freakishly) dominating athlete. His 40 time at the combine (as tested on new equipment, almost universally thought of among scouts as “slower timing”) was only .8 seconds off of Cam Newton’s 2011 performance. He also compared favorably to Newton in the broad jump (10 feet 4 inches to Newton’s 10 feet 6 inches) and the vertical leap (36 inches to Newton’s 35 inches).

Robert Griffin III, QB (Baylor, Copperas Cove)
Pick 2 (Washington Redskins)
Scouting Notes: Redskins Owner Dan Snyder is a short, angry man, but RG3’s Pro Day performance was enough to make him feel 10 feet tall and bulletproof. While many did not have Griffin on their initial 2012 big boards prior to the 2011 season, his Heisman campaign and continued development as a pass-first QB with superior mobility have launched him to the top of the best two QB class we have seen in decades.

Ryan Tannehill, QB (Texas A&M, Big Spring)
Pick 8 (Miami Dolphins)
Scouting Notes: While I am not as sold on Tannehill as many NFL Draft analysts, I do realize the value that front offices place on the position, especially given the reduced price of rookie players under the new scaled wage system in the CBA. A calculated risk for a possible future franchise QB is much easier to take in 2012 than ever before. Tannehill has had 19 career starts at QB. As a former WR, obviously he has a clear, real-time understanding of the route tree and above-average athleticism. He has a clean, high release and gets plenty of zip on passes between the hashes. He struggles going to his second read, and has been known to make unwise decisions at crucial times in games, helping the Aggies to blow four double-digit halftime leads in 2011. He puts too much air under balls thrown on out routes past 18 to 20 yards, which is a pick-6 waiting to happen in the NFL.

I believe Tannehill actually benefited greatly from his fifth metatarsal break (foot) in January. Unlike Nick Foles (Arizona) and Kellen Moore (Boise State), Tannehill did not have the opportunity to prove scouts right in their initial assessments of him being the product of a system predicated on short passes and screens. Tannehill did not have to throw to unfamiliar receivers at the Senior Bowl, or in the pressure cooker environment of the Combine. Instead, he watched his draft stock inflate until his Pro Day where he threw 58 scripted passes to his teammates under the watchful eye of his private QB coach, Chris Weinke.

Michael Brockers, DT (LSU, Houston Chavez)
Pick 14 (St. Louis Rams)
Scouting Notes: The first thing you notice when standing next to Michael Brockers (outside of his pure immense presence) is the length of his arms. They look like 35-inch-long octopus tentacles with big mitts on the end. He can play at both the 3- and the 5-technique, which make him a fit within multiple schemes. He was double-teamed in college with a much higher frequency than Fletcher Cox (Mississippi State) who seems to be a hotter name at the DT position right now.

Brockers is a menace against the run, has strong hands like Casey Hampton, and plays extremely violently in short areas. He has one of the most powerful and explosive shoulder-punch moves that I have seen, because he places the initial jolt of power to the opponent’s chest almost like a forklift technique, then attaches to the blocker on his play-side shoulder and drives. This is very disruptive to running lanes. Brockers’ reach makes him impossible to get proper positioning on in the run game, but he does not represent the threat as a disruptor in the passing game that Fletcher Cox or Dontari Poe (Memphis) have the potential to. His initial explosion is unrivaled in this draft, though, and he is a scary man. Just the kind of DT that new Rams HC Jeff Fisher loves

Kendall Wright, WR (Baylor, Pittsburg)
Pick 20 (Tennessee Titans)
Scouting Notes: Wright was another player who did not participate in the Senior Bowl due to injury (ankle), but was available to test at the NFL Combine where scouts were shocked to learn he measured in at 5 feet 10 inches. He compounded this disappointment by turning in a very slow looking 4.61 40 time. Wright told me at his Pro Day (where he ran a 4.46 and a 4.41) that he was not prepared for the three-second pause required in Indianapolis prior to starting the sprint. He was disappointed in the time and said he had not run a 4.6 “since the fifth grade."

Wright does “play bigger” than 5 feet 10 inches, and shows flashes of a player that could be very much like Santonio Holmes or Steve Smith in the right situation. He was always productive and is a natural hands catcher unlike Justin Blackmon (OSU). He is not a great route runner, but he is a fearless route runner. There are some concerns regarding Wright. It has recently come out that he tested at 16% body fat at the Combine. Teams generally like WRs in the 10, maybe 11% area. His body style is interesting and unique. I would describe him in plain clothes as being very “tube-like” through his trunk. Two NFC West scouts agreed with me that he “plays bigger than he is” and they expressed worry about his ability to stay healthy at the NFL level. I personally believe he will be a very good NFL receiver at the Z.

[Alex Dunlap is a member of the Pro Football Writers of America, the host of RosterWatch on 104.9FM ESPN Radio Austin, founder of Rosterwatch.com, and a featured expert contributor to the FantasyPros.com network.]