Heartbreakers show the Texas Rollergirls how its done 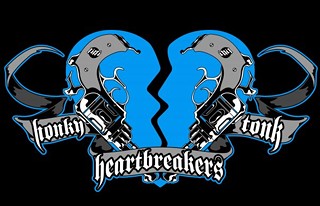 In Roller Derby, there are jams and there are jams. And when Sarah Hipel of the Honky Tonk Heartbreakers pulled 13 points and a last-second win out of thin air against the Hotrod Honeys last weekend, and the roof came off the Austin Convention Center, then that was a jam for the ages.

If you're a long-time fan of the Texas Rollergirls, you'll know the Heartbreakers. Everyone likes them. They have always been the nice team, the team that everyone roots for because you'd like to see them do well. But they have been in the doldrums for the last four years, and went winless last season. After their teeth-rattling loss to the Hell Marys last month, they looked set for a rough season. The Hotrods had already shaken off their pre-season blues with an upset win over the 2011 champs the Hustlers, and going 2-0 would set them up nicely for a title run.

Now I'll admit, I was tough on the Heartbreakers after the last bout. They lacked cohesion, I wrote, and that was where they fell down. And this time? They were like glue. And they needed to be, because this was a smash mouth game. This was a bout of penalties and grand slams, and they went both ways. But ultimately good fortune broke the Heartbreakers' way, and they knew exactly what to do with it.

If one moment defined the first period, it was when Hotrod superstar Olivia Shootin' John faced off with sophomore Heartbreaker Kitty Karnage. OJ got lead jammer status easily, and looked set to put a little bit of a bite into the Heartbreakers' 78-50 advantage. And then Kitty sends a message. She jumps the apex - skipping over OJ's skate on the inside line to take the lead. That's like stopping mid-match against the Bruins to tie your skate laces. That's some moxy right there.

And the Heartbreakers could back it up. Kitty and her fellow jammers NaeSlayer and Flash Gorgeous all put up big, multi-grand slam scores, while Short Cut (amazing to think she's becoming one of their jamming veterans) played a canny game, calling jams rather than risking points.

The second half, the Hotrods looked like they'd taken that wake-up call from Kitty. The Heartbreakers had begun to stall, and the pink and black machine pulled out all the stops. Even with Vicious Van GoGo out, heavy hitting blocker Olympia benched for injuries, and pack veteran Radio Active working the bench, they still have a fearsome array of blockers to call on, with Vargas Grrl showing real pack control and newcomer Action Jackson revealing a tough streak reminiscent of the stiff-arming Hotrods of old.

For points they knuckled down to their go-to jammer rotation of OJ and Bloody Mary, bolstered early on by Haus the Boss. Their pack was tight as a drum, and the Heartbreakers seemed hellbent on giving the Hotrods every opportunity they might need. There were points where Booty Queen may have wondered where the rest of her team was: A quick glance at the penalty box would have told her, and that gave the Hotrods an opening to leap from 12 points behind to 15 points ahead.

And jamming Hipel in the last moment was a gamble. The Hotrods, up by 11, needed to do nothing more than keep OJ out of the box. The Heartbreakers needed an unanswered 12 for a win, and the former Killbox had not jammed all night.

And then OJ puts herself in the box with a major.

It happens, especially when you've been pushed to jam three times back-to-back, and the Heartbreakers seemed as shocked by this opportunity of anyone else. Coach Koolaid leaped to his feet, urging Hipel to skate on and skate fast and put those 13 points on the board. The score may have taken a minute to become official, but everyone knew that this was the moment the Heartbreakers made a statement, 136-134, at the Hotrods' expense

Honestly, the Convention Center probably hasn't heard a roar like that since the Hustlers took the title last year. Which made their surprisingly lack-luster defeat by the resurgent Hells all the stranger.

There's little doubt that the Hells deserved the win, and it looked early on like the reigning champs were going to make them fight for it. But after The Killa Sal Monella opened up with an unanswered three pointer for the Hustlers, the Hells just opened the throttle and remained untouchable. They didn't need monster-sized, multi-grand slam jams to take the lead (although Smarty Pants racking up a double while Sal was in the penalty box didn't hurt.) They just slogged through, taking an insane 93-29 lead at the half.

Like the Hotrods, the Hustlers seem to locate some of their missing mojo in the second period. But the Hells weren't making any big mistakes, so there was no window of opportunity for them to jump through. Instead, they suffered through enough long dry spells that it looked like the score board got stuck. Take jam six, when Hells' wrecking ball Poly Gone took a trip to the box. Acute Angel, who showed heart all night, had a shot at a perfect, game-changing power jam, but all she got was a big hit from Luce Bandit and a trip to the back of the pack.

The Hustlers looked a lot like the Heartbreakers last month: Big on skill, short on cohesion. But the Heartbreakers went down swinging, and the Hustlers, well, hard to say they went out with a bang. A final score of 165-69 disappointed Hells' coach Punk Rock Phil (he wanted a full century) but it just left the crowd surprised.

The championship now stands in strange contention. Running 2-0, the Hell Marys head the pack, while the Hotrods and the Heartbreakers are tied at 1-1 and the Hustlers sit 0-2. The home teams get a month off (the next bout sees an interleague visit from Portland's Rose City Rollers and their B-team versus the Texecutioners and their own, newly-minted second squad.) When they return, the Hells will be looking to put the Hotrods out for the count, and the Heartbreakers will want to ride the Hustlers into the sunset.

But wait a minute. This year sees the introduction of play-offs, with the top seed drawing number four, while two and three fight for the remaining contender slot. With a match in hand, it's all very flexible, and those slots could all come down to points differentials. By that metric, the Hotrods with their 141-59 win over the Hustlers last month look pretty promising. But with two massive scorelines in their favor in back-to-back bouts, the Hells could lose and still have a good shot at the number one slot. That puts more pressure than ever on the Heartbreakers to seal the deal. As for the Hustlers, if they can pull some magic out of the hat then even fourth place would not count them out of contention: Anyone care to rule out a play-off upset? Nah, thought not.