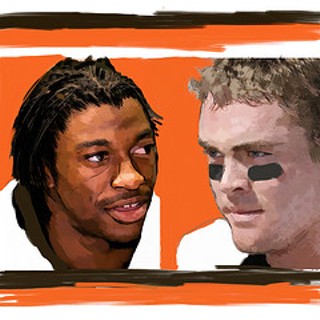 I was in Cleveland the day LeBron announced he would be taking his talents to South Beach. I’ve performed music in Cleveland more times than I can count. One of the things I enjoy about touring is getting to meet sports fans of all different teams, and walks of life. In that one day I gained more respect for Cleveland as a fan base than I have for any other in my life.

The sense of absolute misery that overtook everyone – from gas station attendants to elite music promoters and executives – was overwhelming. Even dogs walked around aimlessly, looking like they had been recently kicked. Cleveland is a city that lives vicariously through their professional sports franchises. Win or lose (and there’s been a lot more “lose” both recently and historically) the fans there take it personally. I love that about them.

Now, the Cleveland Browns are at a crossroads. Coming off a disappointing 4-12 season in 2011, the organization is faced with a monumental decision: What to do at quarterback, the league’s most vital position. My friends, my loyal readers, my fellow students of NFL sickness; it is here you will learn that whatever road Cleveland takes from their present situation into the wild blue yonder will come through Central Texas.

Browns QB Colt McCoy needs little introduction around these parts. While at the University of Texas, he broke nearly every Longhorn single-season and career QB record and took home 13 of 15 major QB awards his senior season as a Heisman and national championship finalist. McCoy is tough, gritty, smart, elusive, and accurate which makes up for his “so-so” arm strength. After being drafted in the third round and getting to start in spot duty in 2010, Colt came into the 2011 season as the Browns’ starting QB in a West Coast system that many close to the team thought he was beginning to get a good grasp of. The Browns’ season went on to be hampered by brutal injuries along the offensive line, a constant merry-go-round freak show at the running back position, and a complete lack of playmaking ability at WR. McCoy was lost for the season to a concussion suffered in Pittsburgh during week 13 via an illegal James Harrison hit. When the dust settled on the Browns’ 2011 season, only three numbers really mattered, though: 4, 12, and 0. Four wins, 12 Losses, and zero career wins for Colt McCoy against AFC North division opponents.

There’s a kid from up the road you might have heard of named Robert Griffin III. The Heisman-winning Baylor QB represents most everything a team looking for revitalization on offense could ask for. He has a big arm, he’s smart, he’s a great leader, and he exhibits excellent downfield vision and elite running ability. The best part: He does not rely on his feet to bail him out. Unlike most elite running QBs, he will always look to make the play with his arm first, sometimes taking brutal hits to remain in the pocket until his receiver comes open.

The Browns have two first-round picks in this year’s NFL draft. Pick No. 4 and pick No. 22. I will be attending the NFL Scouting Combine in Indianapolis next week, and was invited for inclusion in Mike Mayock’s NFL Combine media conference call, where I had a chance to address the Cleveland QB issue. His thoughts were much different from those of NFL writing legend and Senior Editor for the Browns Vic Carucci who we spoke with in Mobile, Ala., earlier this month at the Senior Bowl.

Lets start at the top: The Colts will take Andrew Luck (QB, Stanford) with pick one. Saint Louis picks second. They have too much money tied up in Sam Bradford to even consider a QB. Their reasonable options are as follows: Matt Kalil (OT, USC), Justin Blackmon (WR, Oklahoma State), Morris Claiborne (CB, LSU) or in the best case scenario, trade out of the pick to someone who wants Robert Griffin and accumulate more picks through the very valuable late first, second, and third rounds. The two teams thought to be interested in possibly trading up are the Redskins and the Browns. At pick three, the Vikings would love to have Kalil fall to them, as LT is their single biggest need. If he is not there and Griffin is still on the board, they will try to trade down to a team wanting Griffin as the Vikes reached to draft QB Christian Ponder in last year’s draft. If they cannot trade down and Kalil is gone, I expect them to take Morris Claiborne at this point. Now we come to the Browns at pick four (assuming they did not trade up.) If Griffin is there … should they take him?

“We haven’t seen an athlete like RG3 in many drafts,” Mike Mayock, lead draft analyst for the NFL Network told me. “The chance that the Browns may be able to get him, that’s exciting. It will be a ride, that’s for sure. There are a few flaws to his game, mainly lack of anticipation and waiting on plays to develop leading to too many big hits, but the bottom line is the kid is a playmaker.”

To me, the issue is not about Griffin’s playmaking ability or even his ability to be an elite NFL QB. I see the issue as being the system. Browns GM Mike Holgren is a Bill Walsh disciple. He has been building championship variations of the West Coast offense for almost 30 years now. In coming to Cleveland, he put his managerial trust in Head Coach Pat Shurmur who runs what he likes to call a “pure” form of the West Coast offense. Vic Carrucci affirmed our suggestion that there is generally a three-year learning curve for QBs developing into this kind of system. He went on to say that many decision-makers within the organization were beginning to see vast, marked improvement in McCoy’s progression in the system that was cut off too early in 2011 (albeit by only three games).

He said that if he had to prognosticate at this early juncture, that he believes McCoy will come in as the team’s starting QB next season. Carucci told us that the Browns scouting department has done such a bang-up job on the defensive side of the ball (drafting four defensive starters in the last two drafts) that he believed 2012 would be the year that Shurmur would finally get to address some of the offensive issues that have been left largely unanswered.

So I asked Mike Mayock, "Why would an offensive-minded coach (knowing how hard it is to go through a long QB development process) want to risk the possibility of making his hot seat even hotter by throwing in a wild-card uber-athlete at QB with no surrounding weapons?"

“That’s an interesting question – but we saw it all last year. Offenses are showing more and more … Cam Newton, for example. Look at Cam. He comes to Carolina, they build around him. All these guys, Jake Locker [Titans], Christian Ponder [Vikings], if there is one thing we learned last year it is that rookie QBs can come in and contribute," Maycock replied.

"But you said he has no anticipation. I agree. Do you not think that anticipation is important in a timing-based precision West Coast offense in which you must 'throw receivers open' as opposed to 'throwing to open receivers'?" I questioned.

“Yea, and its another one of these deals,” Mayock said. “You have an exceptional player here and a chance you may be able to get him. Childress, Shurmur, you know; they would have to change how they do some things, sure.”

Mike Holmgren doesn’t just “change things”. His staff will not either. Thinking in such broad terms can be messy. Panthers Head Coach Ron Rivera had the luxury of “letting Cam be Cam” on offense because he was a first-year defensive head coach with his hands full trying to fix the heap of garbage Carolina runs on D week in and week out. I see the idea of RG3 to the Browns as one that could create a lot of excitement for a fan base in dire need of some sort of positive spark, but I just don’t like the fit. Holmgren has stated publicly he will be taking a QB in 2012. This is not an indictment on the position or its current standing, just an affirmation of his regime’s “bullpen” mantra in either drafting or signing a new QB each season for depth and seasoning.

I see so many more reasonable options later in the draft. An accurate, smart passer like Kirk Cousins (Michigan State) in the third round would be ideal to groom under McCoy in case his development does not positively continue given his new weapons and surrounding cast. At that point, you have an accurate passer and student of the game coming into the system without the handicaps that McCoy endured his first season as a starter due to lack of offensive personnel. The position needs to be upgraded, but that does not mean that McCoy could not bring about that upgrade with a better offensive line, an entire off-season/training camp, and at least one offensive playmaker. If Griffin falls to pick four, I believe the Browns could trade down to six and let the Redskins take Griffin. At pick six, hopefully the Browns could land a Justin Blackmon, a Trent Richardson (RB Alabama), or worst case, a Riley Reiff (OT Iowa). Then at pick 22, there will be an embarrassment of riches at offensive skill options, especially WR. Through the second and third rounds is where the greatest value for interior offensive line is found.

[Alex Dunlap is the host of RosterWatch on 104.9FM ESPN Radio Austin, founder of Rosterwatch.com, and a featured expert contributor to the FantasyPros.com network. He is also an NFL draft analyst for PlayTheDraft.com.]