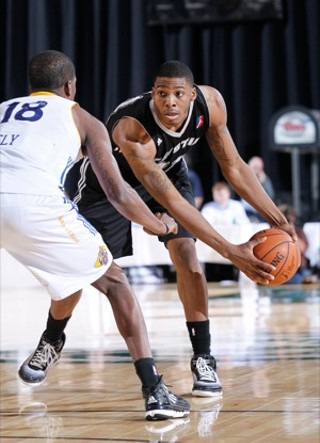 by courtesy of Getty Images

Another week in the D-League books brings us the first Austin Toros' loss in what seems like forever. After sweeping the two road games against the Idaho Stampede, Austin grew lackadaisical against the Iowa Energy, who sat directly behind the Toros with the second best record in the league.

Even with the tough 110-111 loss, a game in which Austin collapsed with one of the lousiest second-half freakouts in recent memory (details below), mind-sets in the locker room remain positive. Austin hopes to build on the best record in the history of the NBDL. At 18-5, the Toros' winning ways have never been matched before, and with the expectations growing by the minute, we savor every tick of the clock as Austin marches toward the playoffs with visions of a championship dancing suggestively in our heads.

The Toros set out on their Idaho road trip with business on their mind, and boy oh boy, did they ever take care of it. Their late January back-to-back on the road against the Stampede came and went with Austin winning both games with ease. The first, a 120-97 stomp, saw Austin shoot 56% from the field, 54% from downtown, and 75% from the charity stripe as they knocked down 22 of 29 free throws. At halftime the Toros led by 19. After three quarters the lead swelled to 24. Perhaps the most impressive stat of the game was that seven of the eight Toros who saw court time scored in double figures, with Jamarr Sanders the lone guy to come short of the double-digit plateau. His 7 points were just as cool though, as he shot 50% from the floor and knocked in a three pointer. Team leader, point guard Justin Dentmon, scored 24 points on eight of 11 shooting, and he connected on four of five three-point attempts. The game was a thing of pure beauty, and goes to show that Coach Brad Jones is the coolest. Lance Thomas had 15 points and 11 rebounds, and Da'Sean Butler found the groove as he contributed 18 points and 7 rebounds.

After the complete unwrapping of Idaho's defense, what would be the sweetest sight for Austin after their road beat-down against the Stampede? How about another game against the very same guys just one night later! And the result was uncannily similar. This time, however, the game was closer in the first half, as only 1 point separated the teams at halftime. It was in the third quarter when Austin took over, outscoring Idaho by 12 in the frame. It was Leo Lyons' night to shine. Lyons led the team as he scored 25 points and double-doubled with 10 rebounds. Justin Dentmon was his usual self, chipping in 24 points with 6 rebounds and 6 assists. His 11 of 12 night at the free-throw line was stoic in its simple greatness. Omar Reed came off the bench and continued his efficient ways, scoring 16 points on 6 of 7 shooting. Reed has been great so far this year, shooting nearly 62% from the field in a bench role. He picks his shots wisely, and the Toros love his team-first mind-set as he continues to provide meaningful minutes for first-place Austin. In the end, you have another Toros success with the back-to-back sweep as they easily win the second game 106-92.

With the two victories against Idaho, Austin had won 13 of 14 games, and their record shined bright. In fact, it's the greatest in National Basketball Developmental League history (through 22 games). We've all grown so accustomed to the Toros kicking it with victories, but just like all good things, nothing is perfect, and after two games against the not-so-potent Idaho roster, next on the schedule was Friday's highly anticipated contest against the Iowa Energy, and with it, a good thing came to an end.

The game started out like many for this season's Toros. Leo Lyons led the first half with an amazing 18 points and 9 rebounds, and Austin found themselves up 66-47 at the intermission. Fans started leaving the arena, figuring they could still get in a good meal at various Iowa chain restaurants before climbing into their beds that night, for they surely had long days ahead contemplating the sorghum crop of the summer to come. For those who stuck around, a treat was awaiting, and for us and our Austin Toros, one of the worst collapses we've ever seen. Iowa went on numerous runs in the third quarter, led by Marqus Blakely, and the game was within 6 points for the Charge going into the final 12 minutes. After Lance Thomas knocked in a put-back dunk early in the fourth, Iowa responded with a wild 17-2 run, and suddenly, without warning or alert, the score was 96-89 in Iowa's favor with just over six minutes remaining. Austin refused to let the giant turnaround by Iowa get them down, as they fought back with a 13-6 run of their own to tie the game at 102. The two teams exchanged buckets, and Iowa finally pulled away in the final 30 seconds, with last season's MVP, Curtis Stinson, doing the damage. He scored a bucket to go up by 2, and after a Toros miss, he connected on both free throws from Austin's intentional foul, and the game was sealed. Dentmon hit a three-pointer at the end, but it wasn't enough. The Toros lost 110 to 111 in one of the most entertaining (and most brutal for us Austin Toros faithful) games of the year.

After the tough loss, Austin finds themselves smack dab in the middle of a nice little break with three days off until Tuesday and Wednesday's back-to-back home games against the Vipers of the Rio Grande Valley. The Vipers enter the games at 17-10, three games behind the Toros in the standings. They too are playing a hot brand of basketball, winning six straight before a stumble against the Texas Legends on Sunday night. Both games will be highly anticipated, and if Austin doesn't take care of business against the Vipers and their dangerous venom, they could find the Western Conference playoff picture a bit too close for comfort.

The Toros continue to get production from an extremely deep roster, playing team ball with a classic style, and even with the lingering face injury to Slambuki Luke Zeller, the Toros look to beat the Vipers to remain on top of the D-League. San Antonio Spurs rookie Malcolm Thomas is joining the Toros this week, and his professional pedigree will surely fit in nicely with the team-first mind-set that engulfs every Toros player. With Malcolm in the middle, Austin will have another weapon at hand to combat any foe foolish enough to challenge our guys in our house. The crowd will be fantastic, and you'll be making a million mistakes if you don't join us, Tuesday and Wednesday nights, at the Cedar Park Center, just up Highway 183, as we continue our march toward the D-League title. Flashy moves, wild rebounds, and the effort that matches the birth of a hundred revolutions, it's Austin Toros home games, the most awe-inspiring events in town. See you at the arena!

READ MORE
More by Will Schmidt