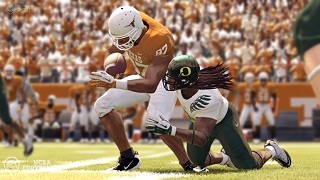 Looking for a gift for your finicky sports-loving friend? Does he or she have a PS3 or Xbox 360? Click through for a list of games that've been in heavy rotation in my game console of late – and a few I'd like to get my hands on.

For the last several months the majority of my video-game-playing time has been spent with the two big football titles: NCAA Football 12 and Madden 12. I've been a regular Madden player for years but had never owned a copy of the college game.

And let me say I was impressed. Maybe it's the novelty of playing something different but I enjoyed the look and gameplay of NCAA over Madden. Not by a lot, but I would give NCAA the advantage if I had to pick between the two.

I also didn't notice much of an upgrade from Madden 12 to 11, which is disappointing – but not all that surprising for a franchise that basically has a monopoly on America's most-popular sport. That being said, I'm a die-hard Madden fan and get the new installment every year. For the updated roster, better online play, and slightly improved graphics. But rarely for whatever new feature they feel obligated to add on.

One notable upgrade in both games was improved tackling and more realistic and detailed pregame presentation. Group tackles have been much improved and offensive/defensive players are no longer sucked into each other while in close proximity. This makes for more realistic and thrilling play.

Something new for me this year is participating in the online franchise/dynasty mode. Setting up online leagues with friends and then leading your franchise/dynasty through season after season, playing head-to-head online against your friends, has been so much fun. Highly recommended.

Regardless of Madden's lack of improvement over previous versions, I couldn't see a football-loving video-game player being disappointed with either of these.

Outside of the U.S., soccer is the dominant sport, as we all know. And FIFA Soccer 12 dominates the world of console soccer games much like its real-life counterpart does in the real world. I just got my hands on this one recently – and I am very impressed.

I hadn't played this series since FIFA 10, and while loving that game, FIFA 12 makes all the steps forward you would hope that Madden would.

The new player impact engine is an excellent feature, bringing more accurate and varied results when two players come into contact on the pitch with each player's size and strength taken into account allowing for more realistic action.

The new EA Sports Football Club feature tracks your experience points and uses them to support your favorite real-life team. Liverpool fans will play to increase (or decrease) the Reds overall online ranking, but smaller clubs like the Queens Park Rangers don't suffer from having a smaller fan base as the scores are averaged out over all the players, not accumulated.

Overall an exciting update on an already impressive franchise. FIFA 12 (along with MLB The Show) is perhaps the biggest no-brainer buy on this list.

I know it's weird recommending a game that was released last March (with a new installment due March 6, 2012), but MLB The Show is perhaps my favorite video-game franchise of all time (admittedly, I almost exclusively play sports games) and was a deciding factor (along with Blu-ray) in my switch from Xbox 360 to PS3. The Show is only available for PS3 systems.

While 11 wasn't a huge improvement over 10, if your loved one loves baseball as much as I do, has a PS3, and doesn't own this game; well then you need to stick one of these suckers under the tree – or at least promise to buy him/her the new one when it comes out in March. MLB 11 The Show:

While I can vouch for the quality of the rest of these games in the past, I haven't played their newest incarnations, but I'm assuming they are still the top games in their respective sports and should make for fine gifts.

The season proper starts Christmas Day and this game would make for an excellent present for the NBA fan in your life. The addition of many vintage teams and players is especially interesting to me as well as the promise of improved gameplay and presentation. Now if the Rockets would just become contenders again I'd be all set. I plan on gifting myself this game soon.

The hockey season is in full swing so now's the perfect time to pick up the newest installment of EA Sports' NHL series. The best would appear to get better for the most accurate hockey sim on the market. Tweaked gameplay improvements over last year's awesome installment as well as the addition of the Be a Legend mode where you can suit up as hockey legends of the past should slip this one easily past the five-hole into your loved one's stocking.

I have been remiss and have not played a new version of the Tiger Woods franchise in years. That being said, I have always enjoyed it when I did and this one has been receiving positive reviews. I find golf video game to be a calming experience, much like watching on TV. That is when I'm not flubbing easy putts.

The biggest draw here is the inclusion of the course at the Augusta National Golf Club for the first time ever. Augusta is the home of one of golf's four major championships – the Masters. Hence the title.

Happy Holidays and see ya next year.