World Series for the Ages Commemorated in Box Set 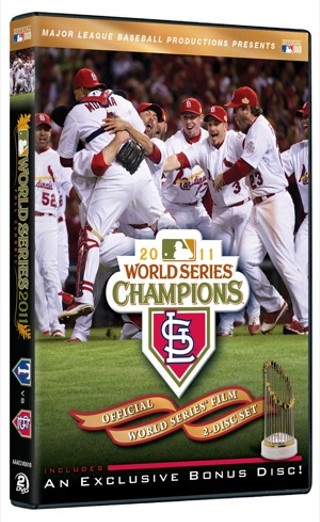 Even Cardinals fans would sheepishly admit that Game 6 alone – in all of its commercially uninterrupted glory, complete with ecstatically impartial postgame coverage from the MLB Network – is enough to justify the sticker price of this deluxe box set. It is so magnificent that it should henceforth be screened for every baseball skeptic across the land.

“You can never get comfortable. I think we got the feeling that most teams felt during the season when they played us. … It was a little bit like playing ourselves.” – Josh Hamilton

"By the way, when you're a little kid and you're out there, you don't have a bunch of reporters and fans that are ready to call you a choking dog if you don't come through. So when you're a kid, you don't realize what a big moment that is. I'm just going to caution all little kids out there: Be careful what you wish for." – Lance Berkman

Watching from a safe distance the 11-inning panic attack that was Game 6 of the 2011 World Series, one realizes there were moments when it appeared as if Josh Hamilton, the onetime self-destructive hellion, and Lance Berkman, the onetime Houston Astro – two of Major League Baseball’s most fascinating people – were the only players capable of maintaining both their composure and motor skills from the first pitch through the 383rd.

Even David Freese, who went from wide eyes to Blue Steel and ultimately emerged as hero of both the game and the postseason, took a pop-up – to call it routine would be aggrandizement – off the top of his head in the top of the fifth, leading to a run. Meanwhile, the Rangers and Cardinals would combine for five errors and 23 runners stranded over the course of the night. That Ron Washington’s team surrendered five leads meant Tony La Russa’s had to fall behind as many times. Every well-executed play was offset by a grotesque one; each opportunity fulfilled saw another half-dozen squandered. Matt Holliday, who is paid $15 million a year to play a sport, almost trampled teammate Rafael Furcal to death while botching a fly ball; two innings later, he mercifully suffered a series-ending sprained pinkie in the process of being picked-off third with the bases loaded in a fraught sixth frame.

Regardless of your allegiance, if you had any, it was hard to look. Amid the chaos, it was still harder to believe Texas fully grasped that a championship hung in the balance, and that St. Louis fully wanted to survive for a seventh and deciding game.

And then they all came to their senses.

A&E Home Video’s 8-disc 2011 World Series retrospective (one disc for each installment of this Fall Classic, plus another for extras) is by definition excessive for everyone but the most steadfast Cardinals fan, for whom it is essential. For more than a decade, MLB Productions has done an admirable job of preserving the National Pastime’s greatness through an embrace of the best available technology and advancing media. This release is no exception.

In Game 6 Hamilton (3-6, 1 HR, 2 runs, 3 RBI) and Berkman (3-5, 1 HR, 4 runs, 3 RBI) were themselves magnificent: Each, with bright solemnity, willed his team to an awareness of what was at stake, just in time. “In a battle of the beards,” said oft-maligned analyst Tim McCarver when Berkman laced a game-tying single off of the much younger but equally hirsute relief pitcher Scott Feldman with two strikes and two out in the 10th, “the gray beard won.” Minutes before, the struggling Hamilton, a center fielder so hobbled by a strained groin that he had started the game four hours earlier relegated to right, had given the Rangers a 9-7 extra-inning lead with a jarring two-run shot that dropped into the Busch Stadium stands noticeably equidistant between those same positions. It’s Berkman, of course, who gamely tracks the ball to the wall; his body language reads, “Well, shit, but so what?”

It’s such moments that make you love Berkman and merit his prominence in the collection’s extras: a parade of walk-off victories, flash points, generous game-by-game playoff recaps (the beat-down of the Brewers is particularly gratifying), international radio calls, and an actual requisite parade concluding the Cardinals’ remarkable campaign. He plays still a bigger role in the narrative arc of the separately sold seasonlong highlight film narrated by St. Louis native and Mad Men star Jon Hamm, which devotes a second disc to Chris Carpenter’s breathtaking complete game shutout of the Philadelphia Phillies in Game 5 of the National League Division Series.

Carpenter, a fearsome but aging pitcher, will be back next year. As will a 36-year-old Berkman, moving from the outfield to first base in what looks to be the prolonged absence of Albert Pujols, no spring chicken himself. But watching these DVDs will never get old. During the coldest nights this offseason, when they think of El Hombre meticulously setting up his batting cage on a beach in Southern California, the best fans in baseball can take comfort in the fact that for now theirs is the best team in baseball, with and without him.