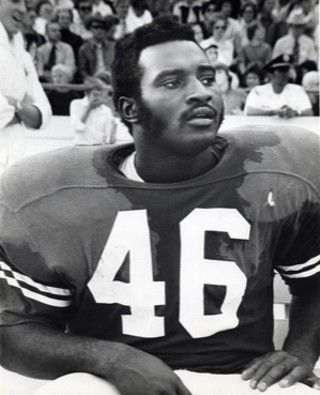 Instead of pondering how Texas will survive its last three football games of this schizophrenic rebuilding season without Fozzy Whittaker, whose UT tenure was ended by a knee injury, I keep thinking back to Roosevelt Leaks.

As a kid in the Seventies I watched Leaks plow through opposing teams. In 1974 he destroyed SMU for 342 yards in a 42-14 win and set a yardage record that would stand until Heisman-bound Ricky Williams racked up 350 yards against Iowa State in 1998. A high school dream name Earl Campbell watched that game, too. He saw the first African-American Longhorn superstar and started stocking up on burnt orange clothing.

Leaks finished third in Heisman balloting in ’73 and the award looked to be his for the taking in ’74. But a knee injury ended that dream (just like it did for Foswhitt “Fozzy” Whittaker last week early in what would become a heartbreaking loss to Missouri). Instead, in the ’74 season freshman Campbell started carrying the ball and a few years later won the Heisman Trophy that would elude Leaks.

Fozzy went down early in a 17-5 Missouri loss. The Texas drive continued without him and led to the only Horn offensive points of the game. It’s the way of a sport that often becomes a battle of attrition. Leaks went on to a solid NFL career for the Bills and Colts, including five years in the playoffs. There’s no telling what’s ahead for Fozzy, who graduated from UT in three years and is now tackling a master’s degree. During Mack Brown’s Monday presser, Fozzy was consoling his teammates, not the other way around.

Fozzy’s got good reason to feel sorry for them: 13th-ranked Kansas State comes to Austin on Saturday to complete the Horns’ home season. That will be followed by road games with the Aggies and the Baylor Bears. Here’s betting either/both Malcolm Brown and Bergeron get some ball carries against the Wildcats — ready or not. The goal will be to make sure — given quarterback David Ash’s frustrating performance last week — the Texas offense isn’t forced to be all passing all the time.

The Texas defense is likely still pissed over the questionable call on Kenny Vaccaro for what looked like a textbook tackle (and if you think I’m just being a homer, read my Oct. 7 piece about helmet-to-helmet hits). That penalty led to a Missouri score one play later and provided enough extra breathing room for the Tigers in a largely offense-less contest.

With Kansas State, Texas must contend with Collin Klein, a double-threat QB who already has rushed for more than 1,000 yards and 24 touchdowns while passing for another 1,500 yards. Here’s betting the ever-improving Texas D gives him fits as the Wildcat offensive line remains weary from a quadruple-overtime win over the Aggies last week.

Can the Horns produce enough offense to stay in the game? That’s the tricky question. Texas is inexplicably favored by more than a touchdown, yet Kansas State actually owns the series 6-5 and played strong against an Oklahoma State team that gave Texas fits.

Roosevelt Leaks, a longtime Austin real estate pro, would likely smile and tell you it’s all about what happens on the field on any given Saturday. Ash is a better quarterback than we saw last week, and we’ll likely see that against the Wildcats. Texas will hobble together some sort of running game. If the Horn D continues to bend but not break, it should be a close contest between the best warriors each team can field this week, this day. That’s all we can ask.