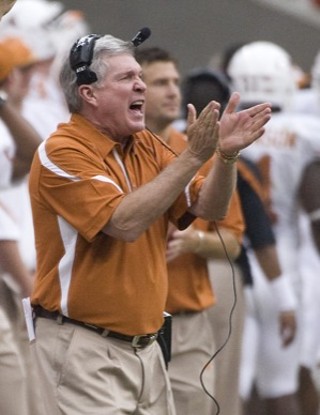 As we enter the Longhorn football season of uncertainty – “Clean slate! Clean slate!” Mack Brown screams at fans. “New coaches (except me)! Clean slate!” – we’re left in search of a metaphor for what is to come in the wake of last year’s 5-7 debacle.

Try on for size Sylvester Stallone’s 1998 Oscar-winning film Mack, in which a coach who can’t win an ACC title for the life of him gets to leave North Carolina for Austin and his big break battling it out with brash and flashy Bob “Apollo Creed” Stoops in the Big 12. Mack Brown brings along his trusty offensive coordinator and sneaks up on Stoops for a win in his first year at the University of Texas thanks to the feet of introspective – and possibly stoned – Ricky Williams, but loses to Kansas State and Texas Tech. The Aggies – “Pay attention to us already or we won’t play you any more!” – go to the Big 12 title game. Stoops awakens in a stoop-er in 2000 and beats Texas five straight years earning Mack the title Mr. February for his recruiting skills and inability to win a conference title. Mack considers firing his offensive coordinator.

In Mack 2, Brown is back and in full training. He kisses Vince Young on the lips, kicks Stoops in the nuts and wins a Big 12 title! Vince ambles into the end zone to secure a national championship against those preppies from USC. Mack gives all the credit to Vince, God, and his outstanding offensive coordinator. Vince leaves early for the NFL.

But in 2009 everything changes. McCoy is a mess against Oklahoma and throws a late interception, but tackles the ball carrier to avoid a back-breaking touchdown. The Longhorns survive Oklahoma 16-13. Texas beats everybody else thanks to a combination of McCoy’s arm and a stellar defense under snarling coordinator Will Muschamp. In the Big 12 title game, Ndamukong “Clubber Lang” Suh calls McCoy a pussy and proceeds to single-handedly dismember the Longhorn offense. McCoy tries to lose the game by running out the clock, but the refs give the Horns an extra second to kick a field goal. They go to the national championship game, where McCoy’s arm transforms into a fettuccine noodle and hot newcomer QB Garrett Gilbert must fight valiantly. Alabama blindsides the youngster and wins.

In the box-office flop Mack 4, the Longhorns tout a stellar running game, but no one believes it for a minute. Gilbert must deal with incessant bullying as the 2010 Longhorns, ranked No. 5 to enter the season, get sucker-punched by everyone from UCLA to Iowa State to Baylor. They do manage to beat Nebraska just to drive the Cornhuskers insane as they walk out of the Big 12. Oklahoma and old nemesis Stoops win the conference title. Again. Will Muschamp packs his bags and moves to Florida. Mack decides to fire his coordinator and anyone else who happens to walk into his office. Seen by critics as both too dark and unintentionally funny, the film is dubbed box-office poison. Texas forms the Longhorn Network.

Which brings us to the latest sequel simply titled Mack Brown. The coach staggers around an ever-changing coaching staff. He makes Gilbert earn his return to the QB spot with Colt McCoy’s little brother in waiting. Whenever Mack mentions a receiver by name, said receiver mysteriously vanishes. Mack mentally vows never to say Mike Davis aloud. Mack’s new coaches are so young, they don’t get any of his Dictaphone jokes. He agonizes whether he should even mention the running game. Mack hides from Malcolm Brown just in case the star freshman back asks for a transfer. Mack tries to remember Jordan Shipley’s little brother’s name. The Aggies make plans to leave the conference and no one notices. Mack calls Darrell Royal and asks for advice on bouncing back from a losing season, then remembers Royal quit before that happened.

Rice Coach David Bailiff calls Mack to ask how those secret practices are going. Mack grins and remembers then Texas State Coach Bailiff’s decision during a 2005 playoff game to have his QB – a Vince Young-ish phenom named Barrett Nealy who gave opponents fits with both his legs and arm – take a knee to end regulation and send the game into overtime. Texas State lost. At least I had Vince that one year, Mack thinks.

But what does he have now? Question marks and possibilities. That’s the theme of this latest sequel to the Mack film franchise. After last year, no one – this writer included – is going to say even Rice is a gimme win. Will the Horns under new co-offensive coordinator Bryan Harsin finally start a game with power? Is Gilbert really, truly the wooden second coming of Chris Simms? What kind of defense will Manny Diaz field? How far off is Mack from that final sequel – the one where he’s retired and full of memories and regrets? But that’s another film for another day. We have a season of mysteries to unravel, and this film begins to unspool in all its agony and glory Saturday night. I’m guessing this season won’t win any Oscars, but it might just possibly win back a few fans.