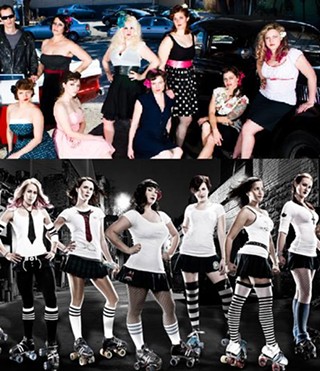 It's a banked track weekend as the TXRD Lonestar Rollergirls, while the Texas Rollergirls take a well-earned rest this week before a frantic July – those that are not spending the weekend up in Philadelphia, that is.

It's heaven and hell tonight as the Holy Rollers face the Hellcats. The Rollers are trying to shake off back-to-back losses to the Rhinestone Cowgirls and the Cherry Bombs, while the 'Cats want to prove they still have claws after getting trampled by the Cowgirls and raked over the coals by the Putas del Fuego. Either way, someone gets to break their losing streak tonight, June 25, at the Palmer Events Center, 900 Barton Springs. Tickets $10 from a skater, $13 in advance (buy online or from a vendor) or $15 on the door. Bout 7pm, doors 6pm.

It was a tough weekend two weeks ago for the league's travel team at the fourth annual Battle on the Bank, placing fifth with a 45-72 loss to the Arizona Derby Dames, followed by a run-off 67-52 defeat at the wheels of the San Diego Derby Dolls. Flat track all-stars Team Legit pulled the weekend's upset by taking the banked track's top award.

It's an off-week for the local flat track league, but July will be a busy months. On July 9 the Honky Tonk Heartbreakers head to Columbia, South Carolina to face the Columbia Quad Squad. Meanwhile the Hotrod Honeys will be racking up the air miles with their trip to Australia at the end of July. They already had their silent auction fundraiser, but donations to their travel fund are still being accepted via www.hotrodhoneysfundraiser2011.blogspot.com.

July will also be a double-header month for the traveling Texecutioners. The next home bout sees Women's Flat Track Derby Association 2011 championship hosts the Denver Roller Dolls coming to Austin on July 16. After that the Texies take a little trip to neutral ground on July 30 when they head to Houston to play the New Skids on the Block. Where are they from? A little place called Canada. Yup, the travel team for the Montreal Roller Derby League will be in Texas: Ticket details when we have them.

Philadelphia continues its run as one of the derby capitols this weekend with the fifth annual East Coast Derby Extravaganza. Representatives of over 90 leagues will be skating on three tracks over the weekend, including full WFTDA bouts. Follow the live stream at www.derbyaccess.com. The Dallas Derby Devils will be making a showing for Texas tomorrow, Sunday, at 3.10pm when they face the Dutchland Derby Rollers from Lancaster, Penn.

Aside from the bouts and training opportunities in Philly, skaters will be strapping on their gear for one more reason: Try-outs to be part of Team USA for the first ever Roller Derby World Cup, sponsored by Blood and Thunder magazine. The successful American applicants will join teams for Argentina, Australia, Brazil, Canada, England, Finland, Germany, Ireland, New Zealand, Scotland and Sweden in Toronto across Dec. 1-4 for the chance to become global champs.

On a personal and professional note, I'd just like to take this opportunity to wish a happy skating retirement to Lauren Bishop of the Cincinnati Enquirer, aka Miss Print of the Cincinnati Rollergirls. Her excellent on-the-track blogs have given a unique insight into the world's fastest growing women's sport.