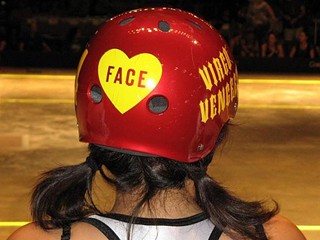 Talk about gut check moments. At Saturday's teacher appreciation night, the Hell Marys face their season's roughest challenge in the seemingly unstoppable Hotrod Honeys. On the same card, the Honky Tonk Heartbreakers fielded a two-thirds strength roster against a full-bore Hustlers. At stake: A place in the Texas Rollergirls' championship game.

For the Heartbreakers, Coach Rhoda Hoedown's strategy was obvious but effective: Short jams would mean more time to recover. The stats speak for themselves: The Hells and the Hotrods crammed 24 jams into their 40 minutes of play; The Heartbreakers and Hustlers went for 30 – a figure made all the more impressive by a canny use of slow starts.

With the stakes so high, it was a rough week for the Heartbreakers to be rolling with a short roster. A full-strength Heartbreakers versus a full-strength Hustlers would be a toss-up bout, but with Heartbreakers' all-star jammers Short Cut and Sarah Hipel elsewhere, and the pack down heavy hitters like Booty Queen, the challenge was massive: How to create working line-ups with only 11 players on the bench. So Rhoda took a deep trip into the bench for previously untapped jammer resources, stretching the energy further.

Even with the best strategies possible, they fell to the Hustlers 36-128. Yet looking beyond the scores, this was an amazing night for them. It was the bout in which Kitty Karnage turned heads by battling seasoned jammers, even getting points on Curvette and stealing lead jammer status from Molotov. M. Pale. It gave long-time fans a chance to see veteran Devil Girl take a rare and screamingly successful trip to the jammer line, while co-captain Ruby Wring pulled the depleted forces together to create a full squad.

If the Heartbreakers felt like the underdogs, then the Hells could probably sympathize. But if coach Punk Rock Phil has taught the Hells one thing this season, it's been to go out there, skate hard, and have fun. Like the gingham-clad cowgirls, they had their own absences and roster changes with which to contend: With new go-to jammer BabyFace Assassin injured out and the phenom Luce Bandit gone for the weekend, they were looking for point scorers. Add into the mix that this was the first bout since captain Ryder Down retired (a loss offset by the return of multiple threat Kat. A Killzem) and this was not the ideal bout for David to be facing Goliath.

It did not help the Hells that they got on the wrong side of a slew of ref calls – the first sending Kat to the penalty box in the opening jam while Vicious Van GoGo racked up 20 points. Yet, even fighting through illness, Kat still remained the calm at the center of the storm and an invaluable addition to the Hells' armory.

Even Kat's presence on the bench was outshone by banked track transfer Smarty Pants. So far this season there had been little doubt of her prowess as a skater and a player, but all those insiders who had been saying "wait and see" were proved right. As she slipped through the pack, sideways, looking backwards, seemingly on one skate, there was little doubt that the Hells had acquired a true impact player.

The Hotrods refused to rest on their laurels, instead pushing and experimenting. It's rare enough to see a team pull off a star pass (when the jammer switches the points-scoring role with the pivot): The Hotrods risked it twice, both times successfully. They also took a chance on some previously unseen jammers, augmenting the solid Vicious/Hauss the Boss/Bloody Mary trifecta with an unexpected turn from Radio Active. The champs even had their own breakout performances, with Maso Kiss scoring some impressive points in her freshman year, and Vargas Grrl continuing her evolution as a pack general. They deserved their 144-46 victory, but no-one would say the Hells did not make them work for it.

So now the August 6 championship line-up is set, as the Hustlers get another chance to dethrone the Honeys. To do that, they will have to repeat their pre-season victory over the champs in the February round robin. In the bronze medal bout, the Hells will bring their ever-strengthening mettle (to be tested again next weekend away against Houston's Psych Ward Sirens) against a full-strength Heartbreakers for glory and a head start into next year.