Texas Rollergirls in school on Saturday, Lonestar on the road 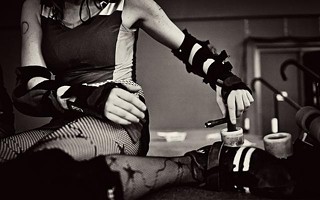 First they moved to the Austin Convention Center: Now the Texas Rollergirls are moving their bouts to Saturday night, starting this week. Aside from a massive double-header of the Hustlers versus the Honky Tonk Heartbreakers in a championship slot playoff, and the Hell Marys hoping to derail the Hotrod Honeys' undefeated streak, it's also teacher appreciation night, with a two-for-one ticket offer for advance purchases with a valid teacher ID. The celebrity whistle blower will be Elizabeth Hudgins, the Eanes ISD math teacher who recently won the Presidential Award for Excellence in Mathematics and Science Teaching. So catch her, the bout and a performance by Butcher Bear & Charlie at 6pm (doors 5pm) Saturday June 11 at the Austin Convention Center, 500 Cesar Chavez, $15; $12, advance; free, kids under 12. Visit www.texasrollergirls.org for more info.

If you're too cheap to buy a ticket, watch out for Texas Rollergirls downtown tonight at the Republic of Texas Rally after-parties. They will be giving away a limited number of tickets to the bout.

Sorted out your vacation yet? How do the Antipodes sound? After the Hustlers' groundbreaking and jet-setting trip to the UK last year, the Hotrod Honeys are going down under in July when they head to Australia. This is no pleasure cruise: The tour includes a the first ever US/Australia bout as the Hotrods take on reigning Australian champs the Victorian Roller Derby League, as well as a boot camp. To get them there, the league will be holding a Killa Queens of the Desert fundraiser at Scholz Garten (1607 San Jacinto), Saturday June 18, 6-10pm. A recommended $10 donation gets access to a night of free food, free beer, live music and a silent auction (the target is $5,000, and online bidding is already open. The league is a registered 501(c)3, so all donations are tax deductible. Find out more about the tour and the fund raiser at hotrodhoneysfundraiser2011.blogspot.com.

You won't see many of the Lonestar army around this weekend: The banked track innovators are in Phoenix, Ariz. for Battle on the Bank, the fourth annual match-up between the best banked track leagues in the nation. Austin's All-Scar Army play the home team at 6pm Central (4pm MST), and if they win that they face the winner between two groups of flat track interlopers: Nationwide all-stars and 2010 silver medalists Team Legit and the Orange County Roller Girls.

That absence gives future skaters another week to practice before the league try-outs, June 8-9.

Eight new leagues have graduated from the Women's Flat Track Derby Association apprentice program and joined as full-fledged WFTDA leagues. That brings the total membership to 117, but there may be a small catch. Split across the four regions, the totals stand: South-Central 26; East, 28; North Central, 29; And West, 34. The Eastern numbers are boosted by having the London Roller Girls, and with Canadian teams in North Central, and Canada, Alaska and Hawaii all counted in the West, geography expands their numbers. Expect some serious discussions in future years about how to deal with future global expansions.

More Battle on the Bank