Wrestling in the Dark

WWE performs a house show at the Drum 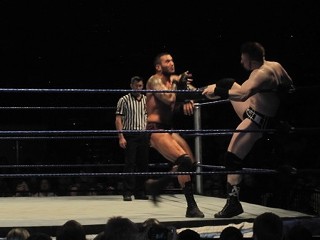 There were no cameras. No ringside announcers. No pyrotechnics. All of the things that are supposed to make a wrestling event special were missing. When the WWE SmackDown World Tour came to the Frank Erwin Center on Sunday, there were only a couple of lights and a few thousand fans … yet it was still fantastic!

When the WWE came to Austin in December for their Monday Night Raw event, it was a spectacle to behold. Nearly 16 semi trucks were required to unload all of the equipment necessary to run a successful two-hour show that would be shown live on national television. Sunday’s event only required one.

That’s because Sunday’s event was what is commonly known as a “house show,” an event more for promotional purposes than anything else and also a way to cash in on an off day. The event isn't shown on TV. There’s never a real risk of a title holder losing his or her belt and storylines never progress. Only the fans in attendance end up knowing (or caring) about the results of the night, which you’d assume would make the event uneventful and pointless. What’s strange is that a lot of the best moments were possible thanks to the event being a house show.

One problem with a live show is the time constraints. There are commercials that need to interrupt action and everything is timed out with only a little bit of wiggle room to account for fan applause.* There’s no time to waste for a live show. With house shows, everything can go at a more relaxed pace. After matches, wrestlers can interact with the fans for minutes on end, an act that would have felt like eternity if it had been on television. For a live show, seeing Rey Mysterio Jr. spend 15 minutes to take pictures with every single ringside fan who wore a luchador mask – and there were a lot of them – would have been crazy. For a house show, it’s expected and welcomed.

*Or in most cases, boos.

Sure, there were times during the event when it felt like wrestlers were killing time just to stretch the show to two and a half hours. Cody Rhodes, for one, spent 10 minutes jumping in and out of the ring before his match supposedly because he was upset with fans booing, which, of course, only increased the intensity of the boos.** Those heels will never learn, huh?

**Helpful Tip: If you ever feel like booing is starting to get boring, try out a new boo. I, for one, practiced my Princess Bride boo.

But then there were times when the WWE knew how to kill time effectively. In fact, one of the main highlights of the night came during one of the cheesiest of time killers: a fan dance contest. Hosted by Austin’s own hall of famer Dusty Rhodes, at first the contest seemed like a bad idea. The first 90% of the contest was utterly unwatchable. The contest totally redeemed itself, however, when a kid no older than 7 known only as “Sean” got to dance in the middle of the ring. He wasn’t particularly good, but every fan in attendance could see the excitement in that kid’s eyes as he was getting cheered on by thousands while he worked his moves. He won, naturally, and was then informed by Dusty that he’d get to go meet all of the WWE wrestlers backstage. Oh, to be young again.

Wrestling itself was almost an afterthought. No one cared about who won the diva tag-team match, they just cared that Rosa Mendes’ leopard thong was showing. And we all knew Randy Orton wasn’t going to lose his WWE World Heavyweight belt against Christian and Sheamus during the triple threat main event, but just waiting for Orton to perform his finisher, the RKO, was suspenseful enough. The fans didn’t need a title to change hands. They just need to see their favorites in action.

All in all, it was a great show. What the show lacked in production quality and suspense was more than made up for with fan interaction and intimacy. For the televised events, there’s a relationship between the wrestler and the camera. Last night, however, the wrestler's relationship was with who it should always be with: the fans. Let’s hope that in the future Austin books just as many house shows as it does live events.