In what will be remembered as the 'Phillips draft' 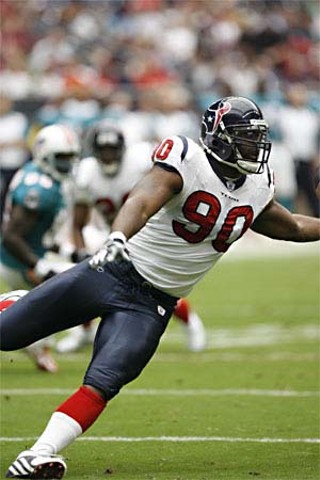 The Houston Texans 2011 NFL draft will most likely be remembered as the “Phillips Draft.” Throughout Gary Kubiak's tenure as the head decision maker, defensive draft picks have been difficult to follow. The Texans take a communal approach to the draft. They gather input from scouts, position coaches, and coordinators as well.

Kubiak makes the offensive selections and Texans General Manager Rick Smith has historically made the defensive picks. It's not that Smith had been picking bad players, but rather, there seemed to be no real scheme for said players to fit in to. All that seems to have changed with new Texans defensive coordinator, Wade Phillips, inclusion into the war room.

This is the first year I can remember seeing a sense of logic to the defensive picks as a whole. The Texans have always had a very clear philosophy when it comes to the type of players they want in their locker room. Texans owner Bob McNair believes very strongly in character and he wants the Texans to become the model franchise for the NFL. Houston actually has a motto that describes exactly the type of players they want on their football team.

“We want tough, smart, physical football players with a passion for the game.”

The end portion of that motto is what really stands out to me when you look at Phillips' influence on the 2011 draft. Virtually every player selected by the Texans this year could be categorized as “high motor” as well as “passionate about football”.

Phillips will be installing the (appropriately named) “Phillips 3-4” in Houston this season. The Phillips 3-4 was created by Wade's dad, Bum Phillips. Before going into too much detail about the draft it's important to understand the scheme and how the players drafted will most likely be utilized.

In the Phillips 3-4, the defensive line functions on a “one gap” system rather than the traditional “two gap” system utilized by more typical 3-4 schemes. In a traditional 3-4 the three down linemen are asked to be responsible for two separate gaps on either side of the player they are lined up across from. For example, the nose tackle (or sometimes referred to as the nose guard) would be responsible for both A gaps on either shoulder of the center. They use a read-and-react concept to determine which gap they will be responsible for. In Phillips' system, the defensive front is more aggressive. The one gap system allows the defensive linemen to shoot into a single gap and disrupt the play. The opposite gap that they would have been responsible for in a two gap read is now the responsibility of the linebackers. Much rigmarole has been made about the recent news that Phillips will be moving 2006 first overall pick, Mario Williams, from defensive end to weak outside linebacker, or “WILL." At six-feet seven-inches and 290 pounds, Williams will be the largest linebacker in the history of the NFL. Many have expressed concerns that Williams isn't a good fit at outside linebacker. And he's not, well, not as a traditional outside linebacker. Williams isn't a natural defender in space. Turning and running with a running back or covering in a deep zone don't match his natural skill set as a physically dominant pass rusher. But all of this is widely irrelevant. Phillips won't be using Williams as a dropping linebacker. Mario will be used much like Demarcus Ware was used in Dallas. You can expect to see No. 90 standing up on mid-distance rush downs as well as down in a three-point stance on passing downs. His role will be virtually the same as it has been for the entirety of his career, see the quarterback, go kill him.

Williams to OLB Created a Need at DE

With Mario moving to OLB, the Texans created a need at DE opposite Antonio Smith. Smith was easily the Texans most disruptive pass rusher last year and he should be slated as the weak side DE lining up underneath Williams. Enter J.J. Watt, defensive end, Wisconsin. At six-feet five-inches 290 pounds Watt is a mountain of a man. Here is our assessment of Watt on draft day from Texans Bull Blog:

When the Texans picked Watt at 11th overall, still on the board were fan favorites and at one time or another, No. 1 pick prospects, Robert Quinn and Nick Fairley. Also on the board was Cal defensive end Cameron Jordan, considered by many to be one of the best all around football players in the draft. As is typical of the Texans draft selections, they went with the guy most people weren't considering. Watt meets the Texans motto to a T.

Watt was the recipient of the Ronnie Lott IMPACT award. IMPACT is an acronym for: integrity, maturity, performance, academics, community, and tenacity. The award purports to equally recognize the personal character of the winning player as well as his athletic excellence. It also suggests that Watt has the kind of ferociousness that, should he need to cut off a body part to finish a football game, he’d at least consider it.

According to Phillips, Watt's productivity at Wisconsin played a major role in their decision to draft him with the 11th overall pick. “I think his production has to be the big factor. When you play the defensive line position and you are the second leading tackler on the team and you also are also the second leader in passes defensed, those are two areas that the defensive line shouldn’t even be close to that besides leading in sacks, hurries, caused fumbles and blocked kicks. This guy is a productive player.” Phillips said.

Watt actually offers up more versatility for the Phillips 3-4 than almost any pick the Texans could have taken. The first-round pick projects as a very good run defender and average to above average pass defender. While Watt doesn't have great quickness off the line, he is excellent at getting off blocks and is very good in pursuit as well as a sure tackler. (Think Aaron Smith, DE for the Pittsburgh Steelers.) The Texans will have much more flexibility with players like Williams, Antonio Smith, Brian Cushing, and Connor Barwin. If you think about those hybrid qualities along with Williams’ natural abilities, Watt should free up Wade Phillips to really get creative. Conceptually, you can almost think of Houston's front seven as a unit rather than seven specific positions. Guys like Barwin, Smith, and Cushing are capable of playing numerous positions in the Phillips 3-4.

Stay clicked on The Score as Texans Bull Blog continues it's breakdown of the Houston Texans 2011 draft. In our next installment, we break down the second-round pick, Brooks Reed, defensive end, Arizona.

[New Chronicle Sports blogger Barrett Walton is the managing editor of Texans Bull Blog. A Houston Texans football fan first, and writer fifth or somewhere further down the line, Barrett has been writing for Texans Bull Blog along with his partner, John Hallam, since 2010. Texans Bull Blog offers year-round news and analysis, video of individual player performances and more. Highly recommended for any Texans fan.]