Four-Wheeled Race to be First 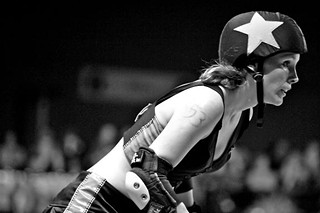 There are good Roller Derby bouts, and there are great Roller Derby bouts. But if you're lucky, you get to see a "you shoulda been there" Roller Derby bout. When the Hotrod Honeys and the Hustlers were tied 51-51 with less than a minute on the clock, Sunday's crowd at the Austin Convention Center knew this was a bragging rights night.

No doubt about it, the second Texas Rollergirls bout at their new home was high stakes. The Hotrods, fuming from their February round robin defeat by the Hustlers, wanted a do-over. The Hustlers wanted to prove that February was no fluke. Truth be told, they were both vindicated.

The first period was a battle of the blockers. With both teams still adjusting to the convention center floor, the power hitters were forced to rethink their strategy to a positional approach. If any team in the league knows how to play the positional game, it's the Hustlers. Meanwhile their star jammer Molotov M. Pale was giving a clinic in methodical jamming, hanging back until a gap opened in the pack and just gliding through.

What gave the Hotrods the initial edge? Let's call it the Madison Miracle. Vicious Van GoGo, freshly returned from Wisconsin's Mad Rollin' Dolls, briefly gave the Hotrods the lead in the first half with a double grand slam. But after Curvette took a rare trip to the jam line and gave the Hustlers the lead on jam seven, the purple and silver terrors took every opportunity to control the pace and extend their lead.

The Hustlers had stalled on points, and when sophomore Hotrod Hauss the Boss closed the gap to a 51-51 tie, Bloody grabbed a quick five for the lead, 56-51. With seven seconds on the clock and the whole building screaming its head off, Vicious took one last quick trip to the track. Leaving The Killa Sal Monella stuck in the pack, she quickly called the jam and a well-deserved nod for player of the bout.

The Hotrods rolled away with a victory, but also with an unavoidable realization: The Hustlers had their number, and undoubtedly dominated the first half of the game. By the same measure, the Hustlers know the Hotrods kept their game plan right to the final whistle. Both teams also made tactical errors that they are unlikely to repeat: The Hotrods were readily able to dominate the inside track, while the Hustlers consistently controlled the pace and the front of the pack.

What was less widely noted was that the on-paper victors of the night were the Honky Tonk Heartbreakers. A 46-91 victory over the Hell Marys marked the continued and seemingly unstoppable growth of Short Cut as a jammer, but also proved the depth of the Heartbreakers' point-scoring roster, with Sarah Hippel, Nae Slayer and the rapidly improving Beef all adding to their margin of victory.

The Hells continue along their long path to becoming a major threat, but undeniably are evolving. The new uniforms, the recent travel win against Pikes Peak, the upcoming bout against the Cen-Tex Sirens, the formation of their own fan club are all part of that process, and just as important as getting to test themselves at home. Luce Bandit still remains a phenom and Short Cut's finest repeat rival, but banked track transfer Smarty Pants is quickly adapting to competitive flat track's physics.

So the Hotrod and the Heartbreakers each get to mark one up in the win column, and the Hustlers and the Hell Marys know their targets. Last season was all about who could catch up with the Hotrods. The story this year is about who can improve fastest. As every team adapts to the new, slicker, slower surface at the Convention Center, there are still serious opportunities for major upsets. At this point, it could even just come down to who gets their wheel configuration right, and that's what makes for an exciting season.