News Flash: UT Football Will Not Lose This Week 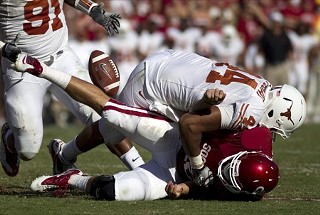 One of UT's standouts, Jackson Jeffcoat (what a great name) (Photo courtesy of UT)

The good news? The University of Texas will not lose a football game this week. I think you know the bad news.

Texas fell apart early against an OK but not great Oklahoma team and the Burnt Orange couldn’t find its offense in time to survive in a 28-20 loss.

Make that back-to-back losses with a third looking very likely next week (after taking this Saturday off to grieve) at a Nebraska team that is much better than the Sooner squad — particularly on defense. Take a deep breath, University of Texas football fans. There is a lesson in losing. And more lessons may be on the way as UT tumbled out of the Top 25 for the first time since 2000.

At this point we’re looking at as many as five losses this season. Oklahoma State is now a tough game. A win against the Aggies is not a sure thing. Baylor? The Baptists’ hot-handed QB Robert Griffin is back, baby. No win is a given, not even Florida Atlantic. Why? Because Texas is erratic with miscues and penalties that are head-shakers. Oklahoma played its usual game plan — strong first half followed by a long nap in the second stanza. The Sooners only second-half score came courtesy of a ridiculous Texas defensive penalty. OU QB Landry Jones was getting smashed up that point. OU tried so hard to lose the game that Jones even dropped the ball late in the fourth quarter. Texas let it roll out of bounds, then Aaron Williams dropped the ball on the ensuing kickoff to put this stinker to bed. Pee-yoo. Coach Bob Stoops left the field looking like he’d stolen gumdrops from the candy store. He knows he got away with one. (A fake field goal when you’re ahead by 11 late in the game? Really?) His own words: “We got lucky.”

At halftime, ABC ran a clip of Coach Mack Brown telling folksy anecdotes about teams that score field goals instead of touchdowns. Hello, Pot, meet Kettle. Texas twice sent the ball through the uprights after frustration in the red zone. The expectation this year is the defense will be the Horns’ offense or at least help keep the score from getting too lopsided. Sorry, Mack, this isn’t the best defense ever at UT, not in the first half against OU. Monsters like Jackson Jeffcoat give us hope, but the fresh crop of penalties doesn’t.

What looked promising against OU? Fozzy Whittaker ran the ball as well as a UT ball carrier has this season, which is faint praise, but praise all the same. Cody Johnson suddenly came semi-alive in the fourth quarter. D.J. Monroe became Big Play D.J. Unfortunately his 60-yard touchdown run was the only explosive play the Horns could muster. Garrett Gilbert had poise. The Sooners tossed him to the turf, but he got back up for more and didn’t give up. His one interception was on a desperation play at the end of the first half. Marquise Goodwin showed sparks of speedster life.

So when will the bleeding stop? I think we’re going to find out soon. Breath deeply. Imagine a win over Nebraska. Can you? The picture is fuzzy. Anything is possible, just not likely until this Longhorn team grows up.