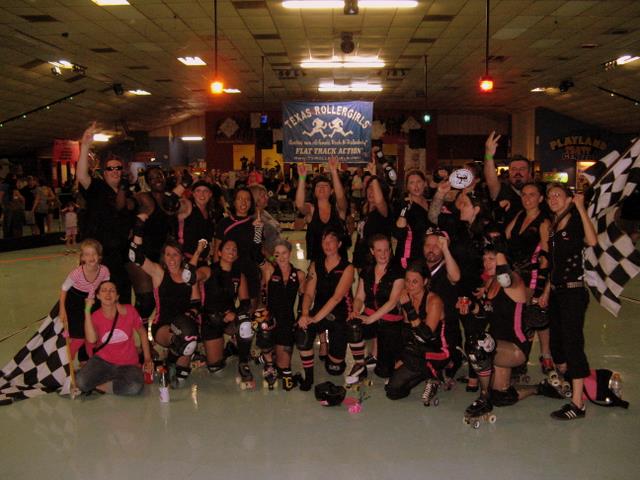 There's only one way to sum up last night's 2010 Texas Rollergirls championship: The dynasty continues. The Hotrod Honeys managed a threepeat, fending off a brutal challenge from the Hustlers to hang on to their third consecutive title.

Think it was an easy victory? Think again.

For all but the last minute of the first period, the Hustlers were a dominating force. When their jammers got through the pack first, they made it look easy: But the Hotrods faced a serious wall of purple, with Curvette and Lady Stardust putting the hammer down and Belle Starr retaining her title as one of the greatest one-woman road blocks in the sport.

The Hustlers' three-jammer rotation took and held an early lead, holding the Hotrods to a 13-31 scoreline with less than two minutes on the first period clock. That's when this year's big Hotrod transfer, Bloody Mary, started to upset the apple cart with a double grand slam, pulling up to 23-31 at halftime.

From then on, it was the first half in reverse. Bloody came out for another double grand slam in the opening jam of period two, then Olivia Shootin' John got her own 10 points when Hustler Molotov M. Pale made an ill-timed trip to the penalty box.

Still, a 47-38 lead with more than half a period left meant it was still too close to call. With both teams practicing pummeling defensive derby, both Molotov and Babe Ruthless got vital points on the board, bringing the Hustlers into striking range, 60-52. So again, it came down to the final jam. With OSJ in the box, the Hustlers thought they had a real shot: But with their jammer Acute Angel tied up in the pack, Olivia managed to pick up that vital last lead jammer status and bring the bout to an end, holding the scoreline static. The Hustlers undoubtedly tested the title-holders harder than any home team has challenged them in a long time. Both teams left it all on the track, and the same can be said for the bronze medal matchup between the Hell Marys and the Honky Tonk Heartbreakers.

With both teams pulling out a three-jammer rotation for the opening period, the Heartbreakers took an initial 6-0 lead, courtesy of rookie Short Cut. Seizing the opportunity, she and The Angie-Christ opened that advantage up to a 14-0 head start. But with the Hells' own big-name rookie acquisition Luce Bandit scoring 22 points across six trips to the jam line, they closed in to 29-27, advantage Heartbreakers, at halftime.

Coming back for the second period, the Hells briefly pulled ahead courtesy of Luce for a 31-35 lead. Their pack was at its most cohesive, with the tenacious terrier Slaughtermelon holding back Heartbreaker jammers almost at will. But when the curse of the full penalty box hit the plaid-clad brawlers, that gave Angie a clear run at four grand slams and a 16-point lead that the Hells could cut but never quite break. Even with a final hard-won grand slam from Hells captain Kat A Killzem, the Heartbreakers held off their challenge for a 61-52 close-out to their season. 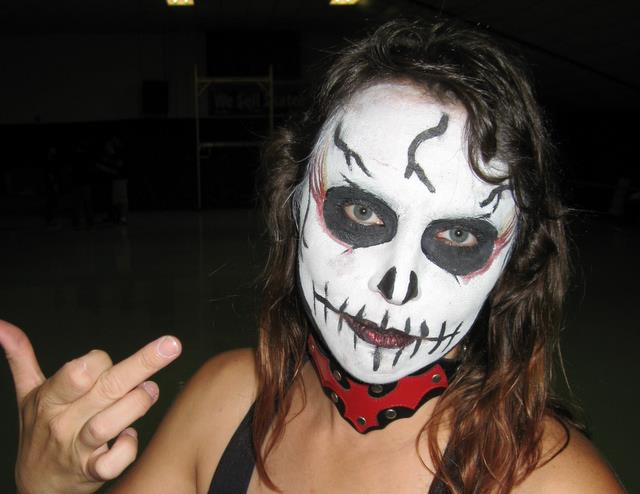 With season's end comes the inevitable sadness of the long list of retirees. So farewell to the Hells for Kat, Peppermint Bratty, and Sin O'Bite: Heartbreakers Mary Lou Threaten, Seek'N'Destroy, and Yellow Die, goodbye: and adieu, Vanna Whitetrash and Fearlys from the Hustlers. Plus there were special thanks for three nonskating retirees who have been there pretty much since day one: Longtime coaches Dagger Deb and Punk Rock Phil, and referee Quicksilver, all helped define the sport as it is played today.

So now to the future. The Hells have one more game, with a quick trip to North Carolina this weekend to conduct a boot camp before taking on the Blue Ridge Rollergirls. There's still one more home bout, with the Texecutioners touring team playing host to the Dallas Derby Devils on August 22. After that, the Women's Flat Track Derby Association 2009 silver medalists will be turning their attention to the 2010 championship hunt.

On a personal note, thanks to the Texas Rollergirls for allowing me to be this week's celebrity whistleblower: Sincerely, …