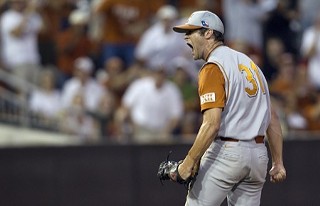 On the television series Lost, the final season used a unique storytelling device. As a devoted Lost nerd, I will try to be as minimally dorky as possible while I explain this device so that all of you who didn’t watch the greatest drama on network television ever can follow along. A Lost history lesson and Texas baseball commentary (I promise) after the jump …

In what the producers of Lost described as a flash sideways, a story format was used to show alternate lives of all the characters that fans had been following for five previous seasons. These characters were almost exactly like fans remembered them, only there were a few obvious differences. For example, one couple that was once married in the real world were now just dating in the alternate life. A lovable overweight guy won the lottery in both lives, but in one he considered the lottery win a curse and in the other he thought of it as the greatest thing to ever happen to him. Same characters, just a different story.

The show producers had a handful of reasons for using this storytelling device. Without spoiling anything, I’ll just say one of those reasons was to suggest that even though there were slight differences in the journeys of the characters in the alternate world, ultimately all of their alternate-life destinations would end up being the same as their real-life destinations. Viewers are taught that whatever happened, happened, and ultimately there’s no way to change the end result.

That being said, I believe the Texas Longhorns baseball team is in the middle of a flash sideways. Think about it:

Last year, the Longhorns faced the Texas Christian University Horned Frogs in the NCAA Super Regionals for a berth in the College World Series. In the decisive game three matchup, Longhorns Head Coach Augie Garrido started his ace, Taylor Jungmann. Jungmann pitched brilliantly, only allowing two hits over six innings. Chance Ruffin closed out the game and picked up a save. Texas made it to the CWS.

This year, the Longhorns faced the Rice University Owls in the NCAA Regionals for a berth in the Super Regionals. In a game that only Rice needed to win in order to play another game, Garrido started his ace, Jungmann. Jungmann pitched brilliantly, only allowing 2 hits over 7.2 innings. Ruffin closed out the game and picked up a save. Texas now advances to the Super Regional against – you guessed it – TCU.

Whoa, right? There could only be more Lost parallels if a bearded Jack Shephard met Garrido at an Austin-Bergstrom International Airport parking lot to urge him that the Longhorns have to advance to the CWS again. “We have to go back, Augie. We have to go back!”

Lost comparisons aside, the matchup between Texas and TCU in the Super Regional does feel a lot like history is repeating. OK, one last Lost comparison: This blog entry is coming with a cliffhanger! A non-Lost preview of the matchup, discussing history repeating itself coming up later this week.

All of the games are sold out but can be seen on ESPN2 (Friday) and ESPN (Saturday and Sunday if necessary) and heard on local radio station 1300AM The Zone.