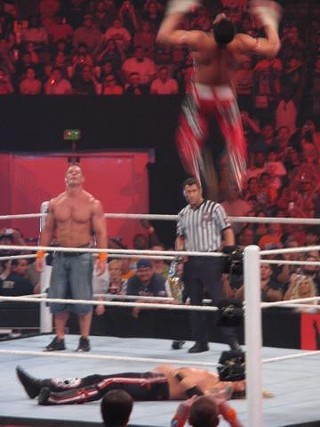 In pro wrestling, they call it pop. That's when the audience goes wild for a wrestler, and when the capacity crowd at the Frank Erwin Center popped for John Cena during Monday's WWE show, they were cheering for one of the most popular mass entertainers alive today.

It's easy to laugh off pro wrestling as low-brow. The other way to look at it is that the crowd at the live broadcast of WWE Monday Night Raw attended the biggest single live theatrical performance the city will see this year.

The WWE is probably the greatest traveling show in the world today and, talking to Erwin Center staff before the taping, one of the most organized. In the average week, the company will produce eight live arena-scale events, including recording three TV shows (Smackdown, WWE Superstars, and NXT) and broadcasting its flagship show, Monday Night Raw, live.

Cena is, to quote his own entrance music, the franchise. Raw's key wrestler, a mixture of street-tough homeboy and aw-shucks farm boy, the WWE champion's taken flack from some old-school wrestling fans for being too meat-and-potatoes (with the emphasis on the meat). Yet seeing him in action makes it obvious why he's top of the heap in the world's biggest wrestling promotion. His arsenal of holds may be limited (hey, Hulk Hogan made a career out of three moves: A scoop slam, a leg drop, and ripping his shirt) but Cena puts a match together so smoothly that his real skill is forgotten: Communicating with the crowd.

Monday night, he put that link to the audience to good use by giving the rub to rising star Evan Bourne. Where Cena is all ground-and-pound, Bourne is an old-school cruiserweight, mixing the best of Japanese puroresu with the high-risk top-rope Mexican luchador style. In a blazing main event against twisted heel Edge and insurgent Irish talent Sheamus, Cena had his time in the ring, but also did everything he could to put Bourne over with the crowd. That's the power Cena has: His approval is all that's needed to make the audience stand up and scream for his man Bourne. Then when the aerial artist delivered a perfect shooting star press (a standing back flip off the top rope on to a stricken opponent), the crowd knew they were backing the right guy.

As always, the WWE delivered a packed card on a massive scale, with vast screens over the entrance and pyros that you could feel outside the auditorium. The hardcore wrestling fans got a brief blast of Bourne's old colleague from his days in Pennsylvania's Ring of Honor promotion, the submission expert Daniel Bryan. There was broad comedy from the malapropism-spewing Santino Marella plus, in a sort of homecoming, Austin transplant Mark Henry got the crowd pumping with a match against second generation Puerto Rican wrestler Primo Colon (that match will be shown as part of WWE Superstars this Thursday, June 3, on WGN America).

As for the old-school fans, they got their thrill with the rare sight of Brett "The Hitman" Hart sharing a ring with his real-life nemesis, WWE CEO Vince McMahon. If you don't know the history of personal animosity between the two, it would be like finding out that the reason that Tipper Gore is getting divorced is because she's running away with Ozzy Osbourne.

Yet for the bulk of the crowd, Monday night will go down as the day that Evan Bourne went from scrappy underdog to a main event star.