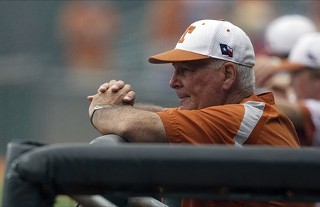 The No. 2 national seed University of Texas Longhorns will host the Rice Owls, Louisiana Ragin' Cajuns, and Rider Broncs in a College World Series Regional Tourney starting Friday, June 4. If Texas wins the double-elimination tourney, they will face the winner of the TCU Regional for one of the eight spots in the College World Series.

The Longhorns just went 0-3 at the Big XII Tournament in Oklahoma City this past weekend, the first time they’ve gone winless in the conference tournament since 2001. But seeing as how Texas still earned a No. 2 overall seed in the 64-team CWS Tournament, it’s clear that Head Coach Augie Garrido probably couldn’t have cared less about his team’s performance in Oklahoma City; he only cares about getting to Omaha, and more specifically Rosenblatt Stadium.

Johnny Rosenblatt Stadium, located in Omaha, Neb., has hosted the College World Series since 1950. However, this will be the final year that Rosenblatt gets to be the Mecca for all college baseball players. A few years ago, the city of Omaha was persuaded by the NCAA Committee that the city would either have to completely renovate Rosenblatt or build a new stadium in order for the CWS to stay in Omaha. Omaha chose to build a new stadium and the decision paid off: Omaha and the NCAA signed a groundbreaking contract to continue their relationship with the CWS until 2035.

So this brings us to the final “Road to Omaha: Rosenblatt Edition.” Augie Garrido is no stranger to the 'Blatt. He’s made an appearance at the College World Series 12 times, winning five times, three times with Cal State Fullerton and twice with Texas. His relationship dates back all the way to 1959 when he played in the CWS for Fresno State. He acknowledges the importance of Omaha and the CWS. “Omaha and the College World Series was one of the most significant things in my life. Augie Garrido wouldn't be Augie Garrido without Rosenblatt,” Garrido said in an interview with Baseball America.

His proclamation of love for Omaha and Rosenblatt didn’t stop there.

“I think the tradition, just the ghosts, the field of dreams, the ghosts of players past as they meet up with players present — just the history of it all," he said. "I think just the tradition of Rosenblatt and where it fits, is like Yankee Stadium to a different industry. It's one of those — it's an Ebbets Field, a Wrigley Field, a Fenway, a Yankee Stadium. To college baseball it's the most significant stadium in the country. It has been an important part of more people's lives than anyone can imagine."

Garrido loves Rosenblatt, and the feelings are mutual. At the opening ceremonies this year, the CWS will introduce its All Legends Team, a compilation of the 28 greatest players to play/coach at Rosenblatt over the last 60 years. Along with greats like Nomar Garciaparra and Dave Winfield, as well as three Longhorns (Spike Owen, Brooks Kieschnick, and Huston Street), Augie Garrido will be introduced as a Rosenblatt Legend. As much of an honor as it will be for him to be introduced at Rosenblatt stadium as one of the three head coaches of the All Legends Team, it’s obvious he’d much rather be introduced as one of the eight head coaches of the final CWS Tournament at Rosenblatt Stadium.

As an Omaha native who knows all about the history of Rosenblatt Stadium and the CWS and their importance to the people of Omaha, I will be returning for the opening weekend of the final College World Series at Johnny Rosenblatt Stadium. I want Augie Garrido to join me. Good luck, coach, and we’ll see you in Omaha!