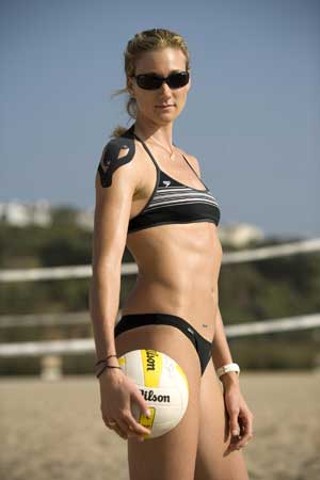 There’s really no cure for the kind of crazy that possesses someone to run 26 miles, but there is a new way to more effectively manage some of the pain that goes along with it.

As thousands of Austin Marathon participants hit the streets Sunday – many of them running through the pain of shin splits, “runner’s knee,” and other ailments common among the fleet-footed – a good number will be wearing criss-crossing layers of stretchy tape on their shins, ankles, knees, and other sore spots. Commonly known as “kinesiology tape,” this elastic adhesive helps to prevent injuries, speed up the healing process, and alleviate pain. And while it has been around for 20 years, popular among physical therapists and chiropractors, only recently has it become widely available to the general public.

Beach volleyball star Kerri Walsh popularized kinesiology tape when she wore it on her shoulder during the Beijing Olympics in 2008. After that, according to KT Tape founder John Mackay, “kinesiology tape” was among the most popular Google search terms for two days. The public response gave entrepreneurs like Mackay a reason to think the tape was ready for a broader audience. I spoke to Mackay on Friday as he was setting up his booth for the Austin Marathon Health and Fitness Expo at the Palmer Events Center. He was planning to give away hundreds of samples and to personally tape up marathon participants just in time for the race on Sunday (the water-proof, latex-free tape can stay put for up to five days).

He showed me how easily I could tape up my own knee (I’ve had patella tracking problems ever since my cross country days in high school), and then he taped up my neck and upper back, too (since my main sport these days is typing). Because of the way the tape lifts the skin and connective tissues, it provides more space in the area for circulation (especially helpful after an injury causing inflammation). It also inhibits pain signals – as such, it is especially helpful for runners suffering from plantar fasciitis and shin splints, said Mackay (as you can see in the picture gallery, Mackay had his own leg taped up for shin splints). Kinesiology tape can also “re-educate” muscles that have atrophied or subtly remind tight muscles of their wider range of motion.

As Mackay and I spoke, Fernando Rodriguez of the Texas Physical Therapy Association spotted the KT Tape booth and called over, “I love that stuff!” Apparently, he’s not the only one. Walsh herself has lent her star power to the brand, and her image (along with her infamous shoulder, taped in black) graces the front of every box of KT Tape. Each box also comes with a detailed instruction sheet (with color photos) explaining the different methods of taping for a wide variety of afflictions, everything from runner's knee to low back pain.

Locally, this particular brand is sold at Sports Authority and Hill Country Running Co.; online, you can find it at Target, Dick’s Sporting Goods, and other sports stores, where it runs at about $13 a box. If you want some for free, you’ve only got a few hours till the expo closes today at 6pm, so run, don’t walk, to the Palmer Events Center.

If You Wear it, They Will Run
Wearable tech is shaping the way people run the Austin Marathon