Luck and the Literature of Football

Longhorns live to fight another day 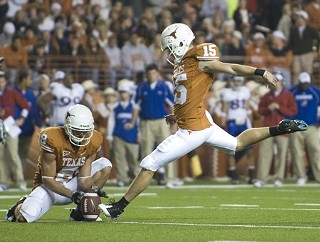 Tim Tebow crying through his John 16:33 eye black. Colt McCoy praying on the sidelines that his kicker can save a Longhorn season. Sam Bradford watching it all (I saw this in a dream) in some rustic Oklahoma sports bar. Oh how the Heisman mighty horsemen fall with a thud.

In case you’re wondering, John 16:33 is a Bible verse that says in part: “In this world you will have trouble.” How’s that for an understatement.

Saturday was a day of classic gridiron battles, the kind that raise fans’ blood pressure and puzzle the nonpigskin believers. Let’s explain it this way: Football at its best is art on a level with your favorite film or the most literary of novels. It’s about a struggle. Someone wins, someone loses, and sometimes the line is nice and hazy. And sometimes it gets ugly.

Alabama beats God-fearing Heisman winner Tebow’s Florida dreams to a 32-13 pulp as the missionary’s son strokes his chin, tears seep from his eyes, and he semi-humbly congratulates the victors. Texas kicker Hunter Lawrence kicks a 46-yard field goal with one questionable second to go (did time really run out? Isn’t time an illusion?) to seal a confetti-covered 13-12 victory over a Nebraska team with absolutely no offense. None. Zilch. Uh uh. Cornhusker game plan? A half-yard, a prayer, and a smashmouth defense.

OU’s Bradford, Texas’ McCoy and Florida’s Tebow are last year’s Heisman triumvirate, and they are battered, bruised, undone. This year’s Heisman could likely go to Mark Ingram, who blazed through Florida for 113 yards and three touchdowns. I’m betting Tebow and McCoy will still make the top three; they should. The award goes to a season, not a game. If Tebow, or more likely McCoy, somehow still pulls out a Heisman win, there will be howls of protest, but there shouldn’t be. They are two of college football’s best and they win, most of the time. Victory goes to the ones who never stop trying.

Does Texas deserve to be in the Rose Bowl fighting Alabama for the national championship after only gaining 220 total yards against a bruising Nebraska defense led by the man named Ndamukong Suh (how do you do), surely the best defensive player in college football today? Yes. By one point. Don’t listen to the naysayers, like my Aggie pal Dom: “Typical Longhorns. If NU had something more than a 3A High School offense, Texas loses in a big way,” he wrote on Facebook. The truth is that while Nebraska has a stifling defense, Texas’ D is better, despite such future NFL stars as Sergio Kindle, Lamarr Houston, and Roddrick Muckelroy placing blasphemously on the All-Big 12 second team (Earl Thomas was the lone defensiver first-teamer, with McCoy the league’s offensive player of the year and Mack Brown as coach of the year). Nebraska’s offense is about as one-dimensional as Texas’, but Texas has McCoy as its admiral. Nebraska had 106 yards of total offense Saturday. In an entire game. Sixty minutes of football. Dom also believes the Aggies came close to beating Texas last week. They didn’t. They stayed in the game, but they never really came close to winning because they didn’t believe they would win.

That’s where guys like McCoy and Tebow come in. Call them cocky. Call them “God is great” slogan shouters. But they expect to win most of the time. And, no, it’s not about luck. Texas wasn’t lucky Saturday night. James Kirkendoll dropped a sure touchdown pass. McCoy had three interceptions – one off a tip, another from a poorly thrown ball, and a third stolen from the arms of a Texas receiver. The Cornhuskers blocked a Longhorn punt. That’s not luck. It’s not luck to keep Nebraska from scoring a touchdown from any of their defensive takeaways. It’s skill. The Texas D is stout. It’s not luck when Colt McCoy connects with Jordan Shipley when he needs to late in the game. It’s not luck that the Nebraska defender “horse-collars” Shipley to move the Longhorns into field goal range. It’s not luck to have one tick left on the clock. Or maybe it is if luck is, as the old saw goes, opportunity meets preparation. That’s the only luck the Texas Longhorns had Saturday night. McCoy’s team struggled and won. Tebow put it all out on the field and came up short. That’s the literary truth of following college football. You strive, you struggle, and sometimes you end up with tears, sometimes with the confetti of victory. That’s literature, my friends. That’s the daily grind, the incessant march of life that we all, you and I, the human beings, deal with every dark morning, every tired, lonely evening. And, yes, that’s what makes art of silly sports like football. If we’re lucky.

The Texas Longhorns will need a lot more luck in the national championship game. They’ll need some answers for an Alabama team that watched and took notes as Nebraska and the guy named Suh probably stripped McCoy of his Heisman Trophy. In Tuscaloosa over at the hallowed Denney Chimes, where the list of Alabama gridiron gods grows each year, the faithful are salivating at the possibilities. The Crimson Tide has a steady defense of its own. And a fine ball carrier in Ingram. But Texas has weapons. McCoy doesn’t quit no matter how many times you knock him down, and the Longhorn defense that has helped him claw to the final game will be ready. They’ll bring their kicker along just in case.