The Master Batters, who had the best record in the ASL this year (11-2), will play the winner of the North Division Finals, either South by Southwest (6-7) or last year’s champions, The Austin Chronicle (10-3).

After New Brohemia scored a couple of quick runs in the top of the first, Bryce Fegley (3-for-4) tied the game in the bottom with a 2-run alternative home run on an arcing fly ball that bounced off Joe Holzheimer's glove in right-center field.

C3 Presents took the lead for good three batters later when Eagles’ outfielder Rye Wilson couldn’t get a grip on Laura Hundley Ritts' sharp grounder in the soaked turf along the left-field line. She got a double and Charles Attal scored.

The Master Batters held the Eagles to one hit over the second and third innings and then started to pull away, building an 8-4 lead before Fegley sliced a 3-run home run down the right field line in the fifth inning for an 11-4 lead.

It was too much for the Eagles, who needed to play a complete game against C3 Presents, much like their come-together come-from-behind 10-6 win on August 26. That game, New Brohemia held C3 Presents to 15 hits and Brian Campbell, Mike Elliott and Joe Holzheimer each homered.

Jim “Pancakes” Turner, the ASL’s batting champ who came into the game batting 6-for-6 against the Master Batters, went 2-for-3 with a triple. Brian Campbell drove in 2 runs, batting 2-for-3 with two doubles, and Mark Twistworthy went 3-for-3 and drove in a run.

But like their first meeting this season, New Brohemia had some holes in their batting order. Bree Blaha went hitless; she entered the game with a .553 batting average and going 5-for-6 against C3. Erik “Swede” Seaholm, who batted for a .606 average this season, went 1-for-3. The last five New Brohemia batters went 1-for-12 collectively.

New Brohemia, the third seed in the ASL South, got to the finals by beating second seed Waterloo Records 15-9 in the first round playoff game on Oct. 6.

The Eagles soared to a 15-3 lead in the first three innings, including a 3-run homer by “Swede” in the first and a 2-run home run by Stan Rose in the second inning.

Waterloo Records started playing defense after that, holding the Eagles to two hits over the next six innings, but they couldn’t muster enough offense to win. 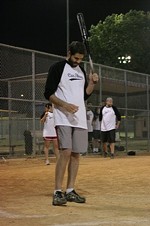