It's Halloween, Do You Know Where the Scariest Football Game Is? 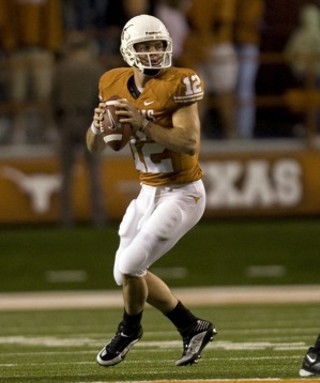 Welcome to Halloween football where the Longhorns sweat the weekend that killed last season and Oklahoma State Cowboys fear the wrath of "Crazy" Mike Gundy if they blow it once again (11 straight losses to Mack Brown's boys? Scarrrryyy …).

Last week all the Horns had to fear was a two-hour flight delay out of Missouri, where they did a flip-flop and had a solid first half followed by total tedium to end the yawner everyone had been waiting for. QB Colt McCoy was named Big 12 Player of the Week and is four wins away from becoming the winningest college quarterback ever. But he's discovered the interception. Be very afraid!

Meanwhile Brown is talking up the defense, not McCoy's Heisman chances. “You can win championships with defense,” the coach said flatly at his Monday morning press conference. And Texas is looking to do that with a heady combination of forced turnovers, brutal physicality and ramrod play that is killing opponents' running games.

Vel-come to Stillwater, Gundy says. We've got a running attack that wants to drink your blood! The Cowboys are 6-1 and on a five-game winning streak and Gundy is calling the offensive plays. The Cowboys are ranked unlucky No. 13, while the Horns are No. 3 and trying harder. Last year Texas eked out oa 28-24 win in Austin. This year? How about the first ever sellout in the newly refurbished T. Boone Pickens Stadium. OSU now has two active players with more than 2,000 rushing yards each in dinged-up Kendall Hunter and a solid Keith “Post” Toston. Zac Robinson could hit 2,000 yards before his career is over and is statistically the top QB in the Big 12. All hope is lost!

To put the frightening facts plainly out there: The Cowboys like to run the ball and average 37 points a game, while the Texas defense is the second best statistically in the nation. Expect blood, my friends! Even this stadium unnerves Brown, what with the fans sitting inches away from the back of his head and the crazy, crazy east-west configuration that certainly has its roots in voodoo and pyramid power. Turn back now. This is not a normal football game.

It's also the closest thing to a real test the Longhorns will have the rest of the season. Brown calls it the end of the second four-game season, with the last four games after it looking mighty sweet. Sure Kansas won't be too easy and the Horns must travel to Aggieland to close out the season. But come on, in College Station they erect billboards that stay up for 12 months when the hapless Ags manage an upset.

Hunter rans for 161 yards against a much poorer Texas defense in 2008. It won't happen this year as Hunter is gimpy and will see at most limited action. Last year Texas racked up more than 500 yards of offense on the Cowboys. That may happen again. But it won't matter. The Texas D is that good. And the Horn special teams will do their best to bury Robinson deep in his own end of the field. Look for a couple big passing plays for the Dez Bryant-less Cowboys (Stop! Do not enter Deion Sanders' house! Go back before all hope is lost!), maybe an interception or two to keep it scary at the halftime, but in the end this one will be 38-21 workmanlike win for the Horns.

But it's Halloween night and there' the ghost of Texas Texas 2008 lurking about. Spills! Chills! Last second heroics aren't out of the question. Trick or treat? I thought you'd never ask.