While the offense remains quiet 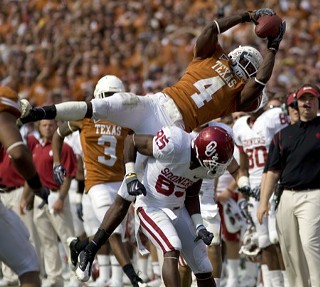 The Horns almost did against Oklahoma in a 16-13 game that the Sooners refused to win. I will not cite by name in this blog a single UT player for his offensive efforts against the Okies. Not one. Nada.

Instead let’s talk about what the Texas defense has been doing all season. They keep teams from scoring in the red zone. They strip the ball. They intercept the ball. They crush opposing quarterbacks. OU QB Sam Bradford got a taste of this early when Aaron Williams knocked the already winged Bradford out of the game. The truth is an injured Bradford – and despite all of those throws against Baylor a week before, he entered the Red River Shootout very, very damaged — isn’t much different than a healthy Landry Jones. Bradford threw 49 times against Baylor, Jones tossed it 43 times against Texas. Bradford’s one complete drive told you where the game was headed if he’d been able to stay in: two completions out of six tries, one for a long gain, field goal.

That one drive should have informed Texas fans this would not be Oklahoma’s day. You can beat Baylor on field goals but you can’t stop Texas, particularly when the Texas defense is better than yours. Oklahoma stayed in the game for one reason: their defensive coaches were the first this season to take a certain Texas receiver out of the game. That guy, let’s call him Mr. Pink, has been the most valuable player for the Horns all season. The Sooners found a way to stop him, and it took the Horns a quarter or so to figure out how to get around that problem with a combination of finally letting the Texas quarterback run the ball like he did frequently in 2008 and finding a new hot hand at receiver – some redshirt freshman from Rowlett.

Texas could manage only 40 yards on the ground in the first half, but managed 102 in the second half with the quarterback racking up 65 yards. The offense did just enough to win while the Horn defense stomped on Oklahoma allowing minus 16 yards rushing for the game. Williams and Earl Thomas had interceptions on both of the Sooners last drives to seal the deal.

Want more examples? Deon Beasley stripping the ball on a punt near the end of the first half to set up the first of three field goals by Hunter Lawrence, a special teams guy who did what he had to do. The Texas special teams did what they had to do all afternoon as well. Justin Tucker’s punting consistently pinned OU back and allowed Texas to win the field position game. Granted, Jordan Shipley had a lot of fair catches, but D.J. Monroe broke one punt return for 23 yards. Clearly special teams and defense combined are the Texas Longhorns at this point in the season.

Offensive output — which will be considerable in a 62-10 walloping this weekend of a Missouri Tigers team that is sorely missing last year’s firepower provided by then-QB Chase Daniel and receiver Jeremy Maclin — is the pretty face on a beastly team that will make it through this season battered but not beaten. It helps to have great tackling such as by this guy Colt McCoy, whose wrap-up of Brian Jackson after Jackson intercepted a fourth-quarter Texas pass kept the Sooners from an almost certain score.

Here’s hoping we see more from this McCoy fellow on Saturday. My guess is we will.