Flat-Out on the Track

Team Legit talks about ramping up for Battle on the Bank 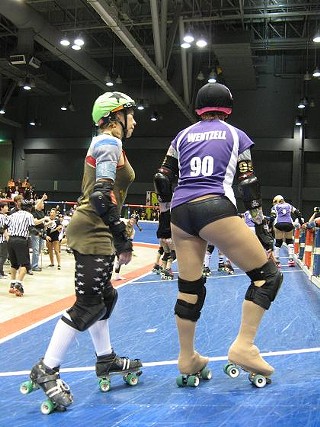 The bruises may fade, but the memories remain. This past weekend, the TXRD Lonestar Rollergirls were hosts to the second annual Battle on the Bank banked track roller derby tournament.

The big upset for many was the strong showing for Team Legit, a one-off assemblage of flat track derby skaters willing to risk the strange inclines of the banked track. Under the management of Rat City Rollergirls' coach Mo Sanders, AKA Quadzilla, AKA Barack O'Trauma, the flat-track all-stars almost pulled off a repeat of the first Battle on the Bank. Back then, Team Awesome (as last year's line-up was known) came within one point of taking the entire affair (although it was so close, and so controversial, that the refs had to publish a post-mortem).

This year, there was no such confusion. Team Legit pushed dedicated banked-trackers the San Diego Derby Dolls hard in the semis, but couldn't stop an all-California final when SDDD went through to face and ultimately defeat their sister league the LA Derby Dolls 78-76. It wasn't so bad for the flat trackers: SDDD was the only team they lost to all weekend, and they finished out their tournament with a 76-54 win over hosts the Lonestar All-Scar Army.

So how hard can it be to switch from flat track to banked track? It's all derby, right?

"There're four people on our team who had ever skated banked track before," said Sanders. For the rest of them, "Their first experience was in a game."

Caitlin Krause, AKA Muffin from Duke City Derby out of Albuquerque, New Mexico, was a veteran of Team Awesome, so she knew the tricks of the bank. "You can use the physics of the track to make moves more effective. The timing is different: If you're a blocker, and a jammer comes at you at full speed, well, the highest speed they clocked on LA's track is 35 miles an hour. If you're barely moving, then she's going to blow right past you."

For the rest of the team, Sanders said, "Being at a slant and angle really threw them way off. When you've practiced flat track for five years, and that's all you've ever skated, then you go somewhere that's high on the sides and keeps throwing you to the inside, it's rough."

On top of that, there was the extra effort of acclimatizing to the one-off tournament rule set. "You would definitely be benched for some of the things that happen here, but the girls really like it. It's one minute jams, rather than two minutes. In flat track, you get a penalty, they yank you right away: Here you serve it afterwards."

The biggest struggle (aside from dealing with the Lonestar skaters: ""They know that track. You could tell, they really knew how to work it," said Krause) was team-building. Out of the eight leagues represented, seven sent established rosters. Team Legit was a one-off line-up, drawn from all over the nation: A strong contingent from Seattle and Portland, Ore., was joined by skaters from Everett, Wash., San Francisco, Detroit and Grand Rapids, Mich. "In the second game, we realized we were having trouble gelling, so we split the team in half," Krause explained.

It was a fairly organic process. With five skaters from Rat City, and several veterans of Team Awesome, "there were two groups of people that have worked together a lot. Plus," she added, "We see each other at all these big events." The result was "two line-ups with two jammers each. Our line-ups were staying on and we were just switching jammers. The same people were working together exactly half the time. I almost want to play that way in home games now, because it was so nice."