Back in Home-Team Colors

After dominating on the road, intraleague flat-track action returns to Playland this Sunday

It's been two months since the four teams of the Texas Rollergirls faced each other on the track. After touring team the Texecutioners handed out a frankly mind-blowing 451-8 defeat (yes, the Score had to double-check that result from several sources) to the Oklahoma Victory Dolls, the league teams line up at home this weekend.

There's a lot on the line, as the Hell Marys try to break their winless streak by taking down a resurgent Hustlers, while the Hotrod Honeys protect their perfect record when they go toe-stop to toe-stop with the Honky Tonk Heartbreakers.

For those of you that can't wait until Sunday to hang around with the TXRG crew, they'll be up at the Carousel Lounge tonight, June 5, from 9pm to midnight for a pep rally with 80's revivalists Crotch Rock It. Free admission with period-appropriate garb, so break out that Exodus t-shirt and sleeveless denim jacket right now. 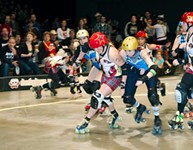