Local creative types battle it out on the diamond 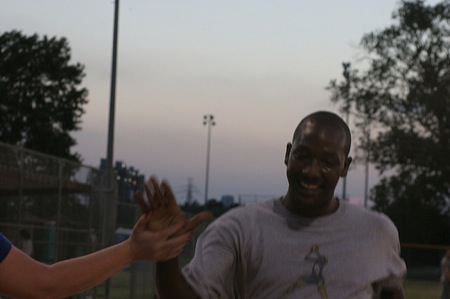 We have served the dark will of cooperation for three decades. Skin as pale as soy milk in the moonlight … eyes blood-shot … showerless. The personal guard to Ronnie Earle’s refrigerator; the food-fighting elite. The deadliest softball force along all of Guadalupe … the Wheatsville SKUs. Wheatsville marched through the Alternative Softball League's northern division, defeating South by Southwest, BookPeople, and the 2008 Champions, The Austin Chronicle, on our way to a 4-0 record. All that stood in our way of divisional domination was KOOP Radio. The odds seemed stacked against KOOP. They were outnumbered. We had four women to their two (hobbling them with an automatic out). Our bleachers groaned under a screaming sea of green-clad berserkers; theirs were empty. We had won four games in a row, KOOP had dropped two. 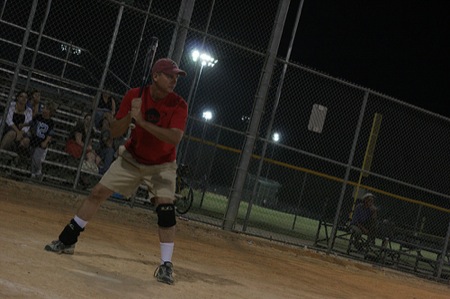 A KOOP player prepares to smash it (Photo by Logan Youree)
But KOOP fought hard and rallied for 3 runs in the eighth inning to beat us 21-19 and grab their first win of the season on May 4.

After a line drive fly-out, David Pernell (3-for-5, 3 RBIs 2B, HR) hit a double off an outfielder’s glove to drive in the tying run. Ben Barthy followed him with another double for the game-winners.

KOOP held us to two hits in the final two frames to seal the game.

Wheatsville struck early, building a 7-1 lead in the second inning, but it was the largest lead of the game. KOOP Radio cut our lead to 7-6 in the third inning, setting up a seesaw battle where neither side led by more than two runs.

We chipped away at KOOP’s lead with four runs in the fifth and tied the game in the sixth before Kevin “Dr. Krankenstein” Johnson gave us a 19-18 lead with a two-out triple in the seventh inning. 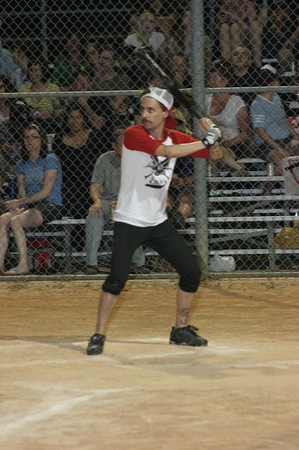 Will Evans from Emo's Alternative Lounge (Photo by Logan Youree)

The Chronicle had the lead for most of the game until Emo’s took a 6-5 lead in the seventh inning.

The unlucky Loungers looked like they may get their first win, but the Chronicle powered ahead with five runs in the bottom of the eighth inning to take the lead for good.

Michael King went 3-for-4 with three RBIs, a gentle reminder from one of the league’s founding graybeards that softball is not actually a youngster’s sport. Billy Jenkins batted 4-for-4 with a couple more RBIs and Jeff Carlyon batted 4-for-5 for the Chronicle. 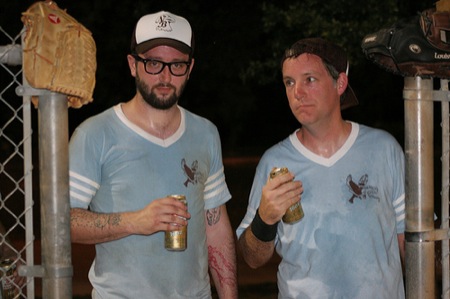 Some of us had been waiting for this game since last season, since the Muntiny on Red River when Joe “Johio” Holzheimer left Emo’s Lounge for Transmission Entertainment and took some of the Loungers best players with him. 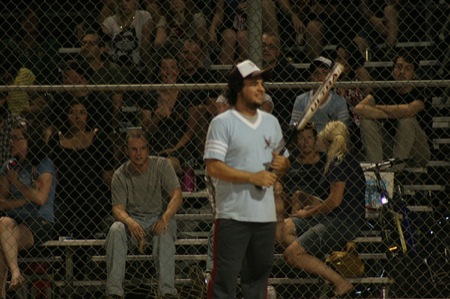 Johio, a 2008 ASL All-Star, took a bounty with him: fellow 2008 All-Star and teammate Brian Campbell and workhorse pitcher Mark Twistworthy. He also scooped up All-Star Eric “the Swede” Seaholm from Waterloo Records. Some of the most able company of the ASL.

Johio seemed to be sitting pretty under the Tahitian-like sun in New Brohemia with his new crew of Nihilist Fucking Eagles. 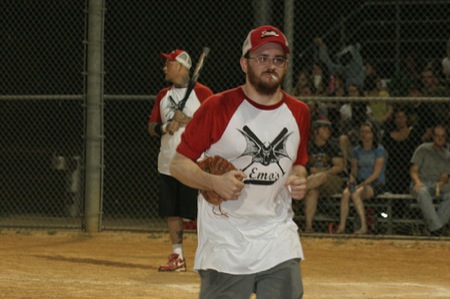 Guilty Dave with Sabala in the background (Photo by Logan Youree)

Meanwhile, Guilty Dave and the remaining Lounge loyalists left last season determined to rebuild, “notwithstanding [their] miserable and almost hopeless situation” (as Captain William Bligh may have described it).

But neither squad had found safe haven this season. The Nihilist Eagles lost their first three games before beating the winless Brentwood Donkeys 15-5 in the Alternative Animal Cage Fight.

Emo’s Lounge was also winless with a 1-run loss to Waterloo Records, and a 2-run loss to The Austin Chronicle.

Eric “the Swede” Seaholm homered – and tripped over his own feet on the base paths – twice and Johio channeled Kirk Gibson and had a hobbling 3-run homer as New Brohemia beat Emo’s Lounge, 13-7, on May 11.

Emo’s had a 4-2 lead in the top of the fifth when Johio (2-for-3, 2B) smacked a deep line drive over the left center fielder’s head with two runners on. Despite a creaky knee, Johio limped his way around the diamond before the ball reached home.

To Johio’s credit, he did invoke Kirk Gibson before the game in some e-mails among team captains. Gibson is most well-known for hitting the game-winning pinch-hit home run in his only at bat during the 1988 World Series between the Los Angeles Dodgers and the Oakland Athletics with a stomach virus and two bum legs. 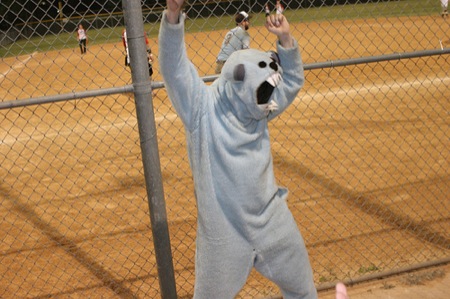 Johio was also cheered on by Butcher Bear, a roughly 6-foot tall baby blue plushy monster with a gaping maw full of sharpened felt teeth that allegedly can play a musical instrument or sing. He’s in a band named for him, Butcher Bear & Charlie. To get that kind of billing, you gotta be good, right?

Paul Somebody had a two-run homer in the sixth inning for Emo’s to tie the game at 6.

Kevin C led Emo’s hitters, going 4-for-4 at the plate.

That’s BookPeople manager Jeff Rose’s summary of a record-smashing slugfest between the Filthy Animal’s and KOOP Radio on May 12.

With steady 10-mph winds and gusts as high as 21 mph at their backs, BookPeople and KOOP Radio combined for and ASL record 11 home runs and a record 60 runs scored. Maybe 18 doubles in a game is a record, maybe 36 extra-base hits is too.

BookPeople won the game 37-23. They never trailed. They now own the record for most runs scored.

But David Pernell hit a record four home runs, most of them off of Jeff Rose’s body. (David Parnell coincidentally had the only over-the-fence home run last season against BookPeople.) He also batted 5-for-5 with a triple for good measure and 7 RBIs.

BookPerson Jennifer Morris sparked the barrage with her first career homer, a 3-run shot to right field, four batters into the first inning. She also batted 4-for-5 – just a little something to remember her by before she left town for Africa. 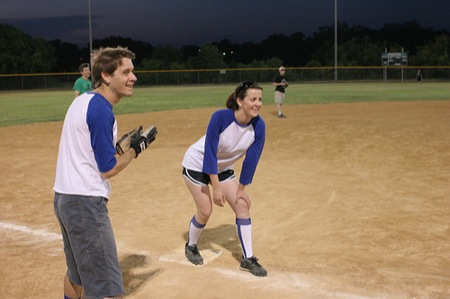 Sally Brooks was flawless at the plate, batting 5-for-5 with a double and an RBI for BookPeople.