And other Alternative Softball League news 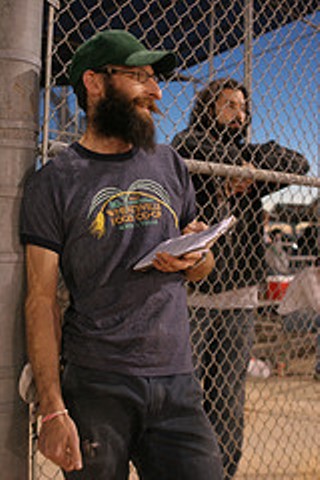 “Pitchers never get any credit,” according to South by Southwest pitcher Charlie “Spinderfella” Sotelo.

I want to believe him, but how much do the other nine beer-fueled ballplayers on the field play a role?

He made a pretty strong case for all the underhanders in the Alternative Softball League by holding the The Austin Chronicle to one run on 10 hits as South by Southwest (2-3, 1-3 North) cruised to an 11-1 win on April 30.

Sotelo accounted for nine outs, including two strikeouts, and lured his former team into hitting nine pop-ups. The Chronicle batted for a season-low .290 average with two extra base hits.

In three games so far this season, they had batted for a .520 average with 26 extra base hits, including four homers.

South by Southwest also showed some stout defense. In the third inning, first baseman Matt Mandrella snagged a line drive by Samantha Jenkins and tagged out Shannon Stott who had left the bag.

Meanwhile, South by Southwest scored eight runs in the first two innings and built an 11-0 lead by the sixth with blistering shots on the edges of the field and Texas leaguers.

It was a different ballgame after The Chronicle (2-2, 2-2) settled down defensively. After the third inning, they held South by Southwest to a manageable three runs on 11 hits.

The Chronicle averted a shutout in the eighth inning with a little love and marriage. With two outs, Billy Jenkins singled and then Stott singled him to third. Samantha followed with a single to drive in her husband.  Wyc Coming batted 4-for-5 with a triple and two RBIs for South by Southwest, enough to excuse getting caught in a rundown between second and third base in the fourth inning.

Darin Klein drove in three runs, going 2-for-4 with a triple, and Matt Mandrella added a pair of runs, batting 3-for-3 with a double.

Only Billy Jenkins and Shannon Stott could withstand Charlie Sotelo’s spin doctoring. They each batted 2-for-3.

So far this season, Charlie Sotelo has pitched for an 11.2 ERA in five games, slightly behind Wheatsville’s southpaw Trae Branham with a 10.0 ERA in three games and Dirk Stahlnecker from C3 Presents, who has an 8.75 ERA in four games.

Trailing 3-1 in the fifth inning, the Nihilist Fucking Eagles (1-3, 1-2 South) strung together four hits and a sacrifice fly to take the lead for good.

Jug Hedd, Joe Holzheimer, and Jim “White Van” Turner, each had singles to load the bases. Rye Bredd hit a sacrifice fly and Brian Campbell had one of his two triples of the game to drive in the go-ahead runs.

New Brohemia piled on three runs in the sixth and four runs in the seventh and eighth innings, while holding the Donkeys to five hits in the last four innings.

The Brentwood Donkeys (0-3, 0-2) took their only lead of the game with a sacrifice fly by Martin in the second inning; and ”Darth” Mader’s solo homer and Hartstein’s run-scoring single in the third.

The Donkeys got a close as 5-7 in the sixth inning on “Darth” Mader’s triple and ”Captain” Gordon’s single, which each drove in a run.

“Darth” Mader (3-for-4) batted a single short of the cycle with a homer in the fourth, a triple in the sixth and a double in the ninth inning and drove in two runs for Brentwood.

You can keep up with all the games, trash talk, and your favorite teams and players through the league’s MySpace page at www.myspace.com/alternativesoftballleague.