An interview with a former Baylor Bear and current Turfcat 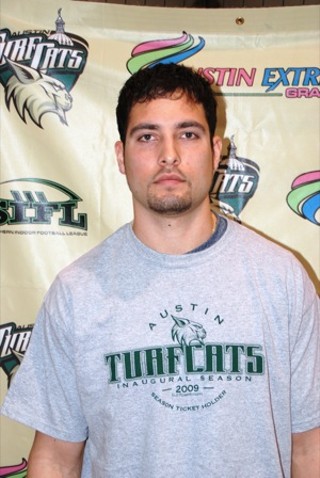 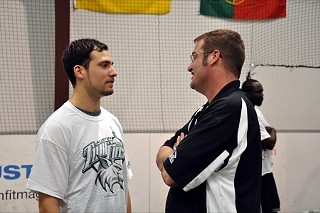 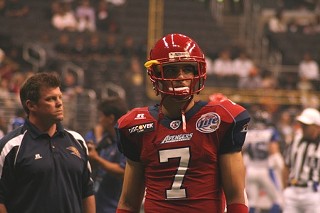 Robert Quiroga after signing with the Turfcats

The Austin Turfcats of the newly formed Southern Indoor Football League get their inaugural season started this Saturday, April 18, 6:30pm at the Travis County Expo Center (7311 Decker Ln.). Tickets for Saturday's game against the Acadiana Mudbugs will be available at the Expo Center box office. For more on the rules of the SIFL, click here.

Austin will be relying heavily on Robert Quiroga to make some big plays in the pursuit of their first franchise victory. Quiroga had a notable career with the Baylor Bears from 2000-2003, signed with the Baltimore Ravens and participated in their 2004 training camp, played in the Canadian Football League for a year, spent three years in the Arena Football League with the Los Angeles Avengers, and is now starting at wide receiver for your Austin Turfcats.

I first met Robert through his wife, Janine, who is one of my instructors in the Boot Camp Challenge. Seeing as how fitness is on my mind, and the mind of many Austinites, I began my interview by asking Quiroga about his workout routine.

Austin Chronicle: What is your typical weekly workout routine and what does your diet consist of? Does this change when you aren't playing football?

Robert Quiroga: My typical workout week is currently consisted of practicing four times a week with the team and lifting two times out of the week. Occasionally I'll supplement that with doing crossfit at either Crossfit Central, Fit & Fearless, or even Crossfit Westlake. I'll even jump into a yoga class or two. While crossfit helps me with functional movements and explosive lifts while also pushing my strength and stamina, yoga helps with my core strength and flexibility. Although my diet isn't necessarily something to be desired of by many with strict diets, I do eat well and certainly eat plenty. Some would even be envious as to what I eat and how much, and wonder how I'm able to stay in the same kind of physical shape that I am. I love my protein and I love carbs! When I'm not playing, the only thing that changes is my workout regimen. It's hard to stay in peak level shape. I go through cycles. I train hard and try to stay at top physical condition just in case I have to be ready to play. I've been all over the place playing, so you never know when you're going to get called on. You just have to be ready when that opportunity comes.

AC: You were a standout wide receiver for Baylor from 2000-2003, do you have any fond (or not so fond) memories of playing in Austin?

RQ: During those years, the Longhorns had a strong team. I can't say that I have some really fond or not so fond memories. I always just played hard and to the best of my abilities. On a side story, I had attended Maddog Madden's Strength & Conditioning Camp in the summer of 1999. I had just come off a super junior year and I was out to prove myself. I tested well and did well in the workouts. During the camp, I was asked about my interest in attending UT as a defensive back since they were already going after the likes of Roy Williams and B.J. Johnson. Due to my frustration, I was out to prove that I'm as good an athlete as the best of them; and that is how I played every game!

AC: Having been a two-sport athlete in college (track and field, football), tell us how running track has impacted your football career and your decision to go to Baylor?

RQ: What many people probably didn't realize, I was actually recruited to run at Baylor University first. In 1999, I anchored the 4x400 meter relay team to the state championship. After the win, my high school coach was approached by coach Clyde Hart to share his interest in getting me to run at Baylor University. I was being looked at by just about every school in the Big XII Conference and some SEC schools during my senior year of playing football. Not many, however, were wanting me to compete in both sports. Baylor University was not only giving me that opportunity, but the freedom to concentrate on track during the spring season. It proved to be very helpful as I was awarded being an all-American and running against and with some of the best athletes in the world. I had the opportunity to run with Michael Johnson, Jeremy Wariner, and Darold Williamson. Track had always helped with my speed and my speed stamina. Many players will start to fatigue in the latter part of a game, but I was always able to maintain a level of high performance throughout. I also had no choice! I served as a wide receiver, returner, and gunner on punt coverage and kickoff coverage.

AC: I know you must be excited to be playing for the Austin Turfcats in their inaugural season, but will hopefully use this experience to take your career to the next level. What is your long-term plan? Have you been in contact with any NFL teams of late?

RQ: This is definitely the start of something new. I know Austin is no stranger to the arena football game, but this is something different. The organization has done a great job on creating that first class experience. I'm doing my best to not only use my skills to play the game, but also using my experience of playing in the big stage to help develop the players around me. My long-term plan is use this as a stepping stone to where I know I should be playing, in the NFL. I have trained with or competed with and against many athletes that have either played or are playing in the NFL, and have had great success against them. A few of my Baylor teammates; Dominique Zeigler (49ers), Trent Shelton (free agent), and Josh Bell (Broncos) are living my dream. I have trained with the likes of Priest Holmes, Wayne McGarity, Coy Detmer, Eric Brown, and Joey Thomas (currently with the Dolphins). I have many great stories about some of the workouts and how I have been dominant during one-on-one drills. However, not many people really know or understand the business side of football. It doesn't always come down to playing ability. It comes down to opportunities, and I'm just waiting to get another one. After being released from the Baltimore Ravens training camp, I have been working hard to get another chance in what I consider to be the "big stage." I spent a year playing in the Canadian Football League with the Ottawa Renegades, and three in the Arena Football League with the Los Angeles Avengers. There was no AFL this year as they suspended the '09 season, so I have to find another way to make a name for myself. Metaphorically speaking, some guys have doors open for them in the NFL, I'm just looking for a window, maybe even just a crack! A great friend and mentor of mine was my college wide receiver's coach, Harold Jackson, who played 16 years in the NFL as a wide receiver. If you were to look back, Harold Jackson was arguably the best wide receiver in the 1970s. We talk often and he believes in me more than any other coach I have come across. He sees the athlete in me and the athlete I can become if just given the opportunity. He has been trying to help me get that opportunity. As someone that has played at that high level for so long, must know what they're talking about and what they see. I have spoken with Head Coach Mike Singletary of the San Francisco 49ers, just trying to let him know that I can be the threat that he is looking for. My speed will always be there, and I know that I can always rely on that to help me. I'm physical too. And if there is one thing that the arena game has taught me, it's how to be more crisp with my routes. I can't say that I would rather choose any NFL team over another, because I want to play! I know I can make a difference for any team on that field, whether playing at wide receiver, kick returner, or special teams. I thrive on making things happen; I'm a playmaker! That is what playmakers do. I live by one motto on that field: "Big time players, make big time plays, in big time games." As far as I'm concerned, every game is a big game.