Senton for the Camera!

WWE's most recent Austin show to be broadcast tonight on myNetworkTV 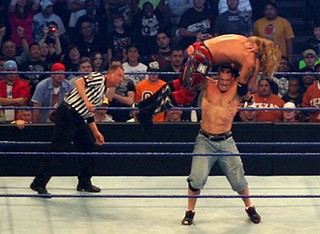 Who says mass live theatre is dead? The WWE, the firm that invented the term sports entertainment, played out their particular form of physical drama and ring-shaking spectacle in front of an 11,000-strong crowd on Tuesday night at the Frank Erwin Center. For those that missed it, there's always the TV broadcast of Smackdown tonight.

It was a night of two recordings, so if you missed the ECW main event when it was broadcast on Tuesday, don't panic, it's available online at WWE.com. The main event was that rarest of wrestling phenomena: a fatal four-way that didn't suck. Smoothly laid out, with just the right amount of back and forth, it highlighted the best qualities of all four wrestlers: the determination of Tommy Dreamer (known to fans as the heart and soul of ECW,) the cunning of the freshly-returned Christian, the unmatched experience of veteran Dave "Fit" Finlay, and the unspeakable strength of adopted Austinite Mark Henry.

But the big draw was the recording of this week's Smackdown, which airs tonight in Austin on KNVA. Don't worry, no spoilers on the results here.

The one sour note was the absence of current WWE Champion Triple H (Hey, Jean-Paul, it's been at least four years since your last trip to Austin: Did we do something to offend?) but the line-up more than made up for it by pulling in some favors from WWE's flagship show, Monday Night Raw, and getting current World Heavyweight Champion John Cena in the building.

Yes, we know, there's a certain tedious cool factor amongst some wrestling fans to hate Cena, and maybe he's not the world's greatest ring technician. But he is undoubtedly charismatic, hard-working, and gets the live fans screaming. Putting him in the ring with Edge as a special dark main event was a gift: But the real higlight of the night was the promos the two cut on each other. Seriously, if you think wrestling is just fake fighting, catch their purely verbal face-off. It may be melodramatic, but it's big theater in the best way.

As for the match of the night, well, as any wrestling fan can tell you, all it takes is two Hardys and one ring for a five star performance. Real life brothers Matt and Jeff established themselves as a tag-team, and that same dynamic has served them well in their current feud. Throw in a stretcher match stipulation, and what you have is even more stuff for the high-flying Jeff and the hard-hitting Matt to pulverize each other with, off or leaping from.

And, yes, as predicted, everyone did boo "Good Ol' JR" Jim Ross for walking in to the arena to the tune of "Boomer Sooner."