WWE Smacks Down the Erwin Center

The wrestling goliath passes through Austin tonight for TV recordings 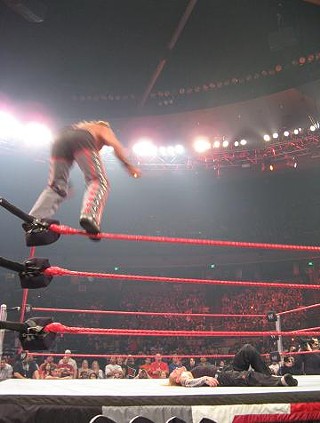 When the WWE turns up in Austin, it likes to give wrestling fans a double helping. Last year, it was back-to-back episodes of WWE Raw: Tonight, the wrestlers of both Sci-Fi's ECW and Smackdown (shown in Austin on KNVA) will be hitting the ring.

Sandwiched between Sunday night's massive Wrestlemania celebrations in Houston and next week's promised roster draft, this'll be the first time Smackdown has been to Austin since October 2005 (hardcore loyalists will remember ECW passed through town for a low-key house show in July 2006.) Currently, the promised main event is a six-man tag, with Randy Orton, Matt Hardy and Edge versus John Cena, Jeff Hardy and (for the first time in Austin in a while) Triple H.

It'll also be the debut of whoever is going to be the permanent replacement for recently departed ECW commentator Tazz (who, for all his mike skills, will always be the Human Suplex Machine to wrestling fans.) And, yes, people will boo "Good Ol' J.R." Jim Ross when he comes to the announcers' table to the tune of "Boomer Sooner."

There are still some tickets left, available through the Frank Erwin Center box office.