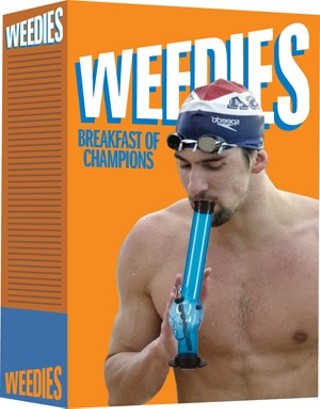 Here are a few things stoners love: Fruit Loops, Frosted Flakes, Famous Amos cookies, Eggo waffles, Cheez-Its (umm, Cheez-Its), Pop-Tarts, you get my point. Guess who is the producer of these "convenience foods"? Kellogg's. Guess who just decided not to renew their contract with public enemy No. 1 Michael Phelps? Kellogg's. Potheads, oops, I mean legalize-marijuana advocates have set aside the remote control and decided to strike back.

The Marijuana Policy Project made the following statement regarding Kellogg's decision: "Cereal giant Kellogg's has announced that it won't renew Olympic swim champion Michael Phelps' endorsement contract because he was photographed smoking marijuana. If Phelps had been photographed hoisting a Budweiser, no one would have said a word. In fact, Phelps was arrested for drunk driving in 2004 – which could have resulted in someone being hurt or killed – and Kellogg's never took issue with that. Alcohol is far more toxic and addictive than marijuana and tends to make users reckless, aggressive, and violent. Please ask Kellogg's to end the hypocrisy."

For more on Michael Phelps and some great stoner moments in the history of sports, see Thomas Hackett's Feb. 13 "Playing Through" column. See the Marijuana Policy Project's website and Jordan Smith's Newsdesk blog post for more on the boycott.