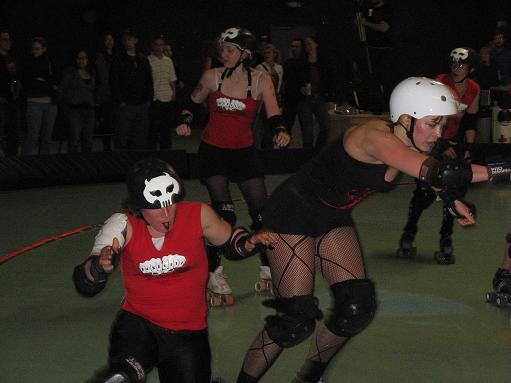 Another year, another flat track derby season over, and the Texas Rollergirls mounted one last stand Saturday night before they rest their wheels for a few months. There was some sadness, like the announcement that league mainstays Dagger Deb and Punk Rock Phil are standing down. But with a host of new rookies and transfers, a new scoreboard lay-out, a travel team bout announced in Lubbock in January (plus Kill-A-Watt, who returns to the purple and silver uniform of the Hustlers next season, promising great things from her team), there was already a lot for fans to look forward to. The real end to this season was the Texecutioners in their last inter-league bout of the year, against the Rose City Rollers' Wheels of Justice touring team, visiting from Portland, Ore. But to kick things off, the evening started with a special bout between two teams drawn from a mix of rec leaguers, rookies, veterans and visitors from nine states plus Canada, all in town for the weekend's bootcamp. For a 20 minute demonstration, where most of the skaters had never played together before, the skillset was impressively high. The real stand-outs may have been powerhouse jammer Betty Bonecrusher, captain of the Steel City Demons' travel team from Pittsburgh, PA, and Bang Crosby from the Austin rec league. 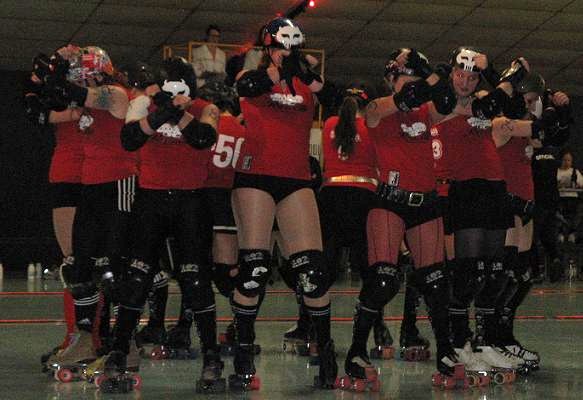 With the Texecutioners eschewing their normal big intro, it was left to the Wheels of Justice to provide some opening theatrics (Photo by Richard Whittaker)

For the record, the Ninja Monkeys thrashed the Rainbow Giraffes 48-13. But this was just warm-up for the main event, and if Texas thought that this was going to be a nice, friendly end to the season, that idea was knocked flat quickly. Rose City came to play. Ranked number nine in the nation, they went out in the second round of October's Western Regionals, denied the chance to play in last months nationals – the nationals that they hosted. With a fearsome pack and nationaly recognized names like Goodie Twoskates on their roster, they had a lot to prove and the skills to get the job done. 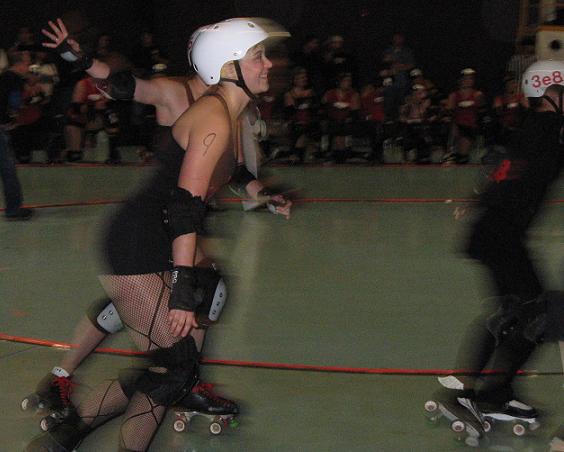 Babe Ruthless warms up by following Rice Rocket (as usual, Rice's distinctive helmet with her number 3E8 on the side is shooting out of frame) (Photo by Richard Whittaker)

After Rice Rocket opened the first period with an uncontested three points, the ultra-talented PBJ Vicious Van Gogo gave the home crowd some jitters in the second jam when she and two blockers went in to the penalty box at the same time, giving Portland's D Konstructor a clean path to a grand slam. Bloody Mary and Rose City's Blood Clottia added a couple of points a piece in the next jam, taking it to 5-7 for the visitors. But that was the last time Rose City held the lead. Within three jams, Texas was standing on a 38-7 advantage, with five successive grand slams under their wheels (one each for Bloody and Rice, and a hat-trick for Olivia Shootin' John.)

That's not to say the Texas had it all their own way. Rose City have picked up a lot of habits from their neighbors, Seattle's Rat City (some good, some less so: the signature trailing leg lead to a lot of tangles and trips.) Their hyper-aggressive style, mixed with a seemingly unbreakable front wall, made them almost impossible to pass for long stretches. That said, there were some raised eyebrows when they took a knee to slow the pack down to a crawl. 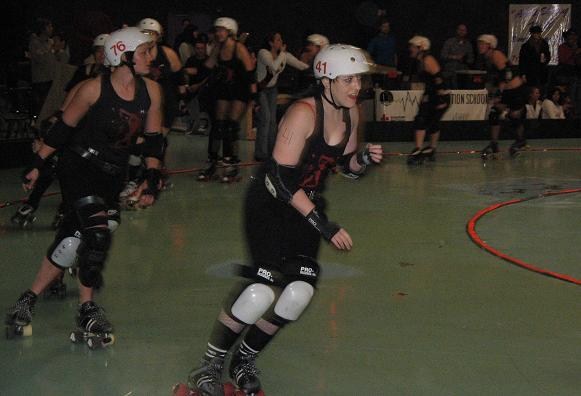 Cheap Trixie, flanked by Curvette, heads up the pack in the last warm up of the season (Photo by Richard Whittaker)

But Texas had something up their sleeve that looked equally unorthodox. Seemingly in response to the tighter regulations about cutting the track (that's where a jammer gains advantage after being knocked off the track by cutting ahead of other skaters), the Texecutioners seemed ultra-cautious about coming back in-bounds. Since the rule change came in, they've seemed to suffer from a lot of jammers in the box from cutting penalties, so while it might risk a few seconds, it's better than a benched jammer. It was possibly the emptiest the Texecutioner's penalty box has been all season, so something was working.

By the second period, Texas was ahead 68-36. But if the first bout had been about speed, this kicked off as a defensive meat-grinder. Over the next six jams, Texas managed eight points, while Rose City only got five. Then the visitors were in the awkward predicament of having two successive jammers in the penalty box, leaving Olivia and Rice to pile on 23 points in two jams, followed soon after by 14 points in one jam when Lucille Brawl wore the jammer's star.

Rose City made Texas slog for every point, but the home team seemed relaxed, confident, and happy. All season, that's been how Texas has played best. So no moment summed up the night better than Belle Starr, jamming in the final bout, sat on the floor with her legs over the crash barrier, grinning broadly. The 133-60 victory seemed almost like a bonus: What mattered was that Texas finished the season with a great bout, surrounded by skaters from across the nation.