It's a Family Affair

Sharing Thanksgiving with relatives at Texas Stadium one last time 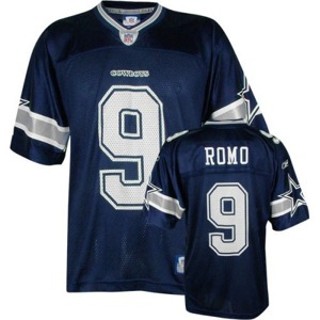 The apparel of choice at Texas Stadium

"Texas Stadium!" said Some Guy, executing a deep and audible stage-inhale to underscore the point. "You can just smell ('smay-ulll') the history!" (or something like that). It was the last Thanksgiving game to be played in the Seventies-era monument to ego and championships; featured were the skin-of-their-teeth Dallas Cowboys (of course) vs. the going-nowhere Seattle Seahawks. (The same guy, or someone in his general vicinity, would in the fourth quarter narrowly escape a beat-down instigated by his Springer-ready girlfriend's spewing of a racist epithet.)

Dude paid his money and has a right to his opinion, I suppose, but really the "history" (also known as "age") of Texas Stadium can be seen more than smelled (perhaps God's glory hole makes for superior air circulation). It's in the ever-grimier concrete columns and faded sidelines, the seats with missing numbers, the dangling-by-a-screw paper-towel holders in the ladies' rooms, the eternal white stripe that is the cheerleaders' shorts, the pollution-besmirched stars ringing the exterior; it's in the scale of things.

It was balmier than I remember it ever being on Thanksgiving – really, once I got past the perfunctory mental climate-change "tsk"ing, the weather was perfect. The Valium-like effects of the well-worn atmosphere kicked in, just like always. I refamiliarized myself with the giant blow-up helmet from which the players emerge and the replay monitors and the Ring of Honor and scanned the skyboxes for famous people and came this close to seeing Troy Aikman in the Fox announcers' booth. I took a moment to mourn Crazy Ray. My husband bought a commemorative popcorn bucket and drinks. I watched the game intently, played the consummate fan, until it became a total rout, at which point I could no longer avoid my prime directive: to contemplate this, my family's last stand at Texas Stadium.

If anything, rather than pumping up the larger-than-life absurdity that is NFL football, Texas Stadium has always brought the game and its stars down to a manageable, human level for me. Despite any number of loudmouthed fans, announcers, tiny between-play song slices, and halftime acts (Destiny's Child, hayyyy) – all the audible chaos inherent in such a mammoth and violent undertaking – there's a certain hush overlaying the roar (this is possibly due to the acoustics, but I prefer to think of it as some sort of cosmic manifestation of respect for the ties that bind us all).

I can see the truth of 10 yards and special-teams nobodies trying to hype the crowd and that everybody still looks small and retro when it's field-goal time. They might as well be wearing leather helmets. What's explosive on TV becomes intimate in person – it's the same transient intimacy that leads one to high-five strangers and shake pom-poms (actual pom-poms) at T.O. and prompts at least 98 freakin' percent of the crowd, clonelike, to sport team jerseys (unscientific survey: Romo, Barber, Witten – one, two, three – an Owens here and there, but not many).

My experience is probably no different from that of most casual stadium-going dilettantes, and seeing the Cowboys at Thanksgiving is a family tradition that hundreds, if not thousands, share. But – to drag poor Tolstoy into this – my family has been unhappy in its own way, and it was usually the way that afforded the most drama. It was therefore comforting (not to mention distracting) to live in a city – Fort Worth, TX – where someone in the public eye – Jerry Jones – had a crew that was usually even more effed up than yours. While the non-Metroplex part of the world may have looked on in disgust, we found comfort and delight in the endless parade of closet cases, felonious crybabies, ice-befuddled linemen, supreme showboats, reality shows, and questionably charismatic nonclosers, and could only be thrilled by Jones' ever-freakier plastic surgeries. I mean, if you're gonna bother to own a professional football team, why go for subtlety? Winning was almost secondary.

Over the years, we have trekked to Texas Stadium, seeking a salve that seemingly only the Cowboys could provide. Early on, we'd set out pell mell, parking hillside on the interstate easement, my dad wheeling and dealing with the scalpers in the parking lot, layered and sweating until the early nightfall, when only continual jumping, cheering, and shouting could keep us warm enough. This was not difficult during, for instance, a Ping-Pong game played against Brett Favre's Packers, a nail-biter and a barn burner. (I can still barely speak of missing Leon Lett's monumental 1993 end-zone brain-freeze – despite holding tickets, we were stymied (not unlike Lett) by the ice and stayed home – just as I will remain mum (if not numb) regarding the subject of the Jonas Brothers' befouling the midfield Star during this most recent and historic of Thanksgiving halftimes.)

In time we became wise to the ways of goose down and, eventually, Stub Hub and paid parking and leisurely jaunts after an early Thanksgiving dinner. None of this made the games less thrilling. We have met amiable drunks, die-hard statisticians, ref-killers, rich bitches, beefcake cowboys (the real kind), preppy dads, bullet-headed kids, and tiny dancers. We (or at least I) have pondered, at great length, the symbiotic relationship between double-sided tape and the Dallas Cowboys cheerleaders and just what it was that made Crazy Ray tick and what turned small and cold in Jerry Jones after the Triplets departed, what deep sadness led to his undeniable roughneck fetish. For the most part, though, we hung on every play (especially during those Triplets/America's Team years) and took a break from whatever shitty, holiday-amplified drama might (or, to be fair, might not) be playing out in our own weird corner of the world.

Once we left the parking lot, all bets were off.