Honey on the Track

Honey Homicide of the Lonestar Rollergirls talks tactics and ligaments 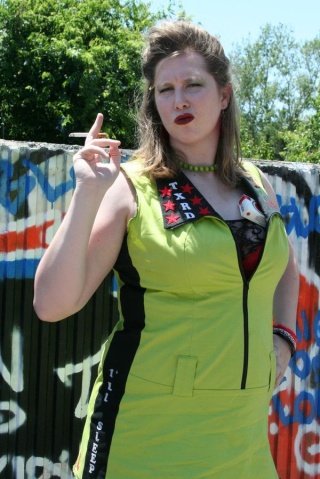 Fans of the Lonestar Rollergirls, Austin’s banked-track Roller Derby league, may have been upset when they finished their 2008 season: But the roller girls might have a different take. As skater Honey Homicide put it, “As soon as the off-season hits, stuff is just dead for a month. Everyone is just, I don't want to see you, I just want to go home and sleep and go shopping for groceries and see my family that I haven't seen in a year because I've been skating with you assholes. It's so funny."

This was Homicide’s fourth year rolling with the Lonestar Rollergirls, but her first as a Cherry Bomb. The former Rhinestone Cowgirl switched teams this year because “the whole lineup was changing, and I didn't feel like I fit in any more. The Cherry Bombs were made up of a bunch of girls from my own training class, and I wanted to be on a more laid-back team." Switching meant missing out on what she calls “the biggest upset in the history of our league" when the new-look Cowgirls ended the two-year undefeated winning streak of the Holy Rollers. The three veterans on the team were joined by nine rookies who came through training as a block, she said, "So they've been able to develop their style all together."

But Homicide is philosophical about not being on that team. “I'm less competitive than most of the girls in the league, because I'd rather have fun and play a good game than win.” Her personal seaon highlight was getting to switch her position in the pack. “I'd played third blocker for several years,” she explained, “and I got to pivot in our game against the Hellcats.” The result? “I fell in love with it. Even though I'd never played it before, it came naturally for me."

“A lot of girls have problems trusting their bodies, [they] think too much and concentrate on the mechanics. I always tell them, listen to your body, your body knows what to do.” Like any other sport, she explains, the biggest hurdles for new skaters can sometimes be mental. “Sometimes it's confidence issues, where they don't feel they're doing well enough or that they're ready. Sometimes it's an inflated attitude, and you have to bring them down a peg or too. It's about bringing everyone together to a point where they can skate and work together with the rest of the league."

Injuries are inevitable: Honey herself has accumulated a bruised sacrum, two sprained ankles, and a separated shoulder (which she writes off as "relatively minor stuff.”) As rollergirls have become more serious and rigorous in their training, accidents, especially bone breaks, have become a little less common. The big danger is now the same as faces any extreme athlete: ligament injuries. "That's the hard stuff, because that takes a long time to heal,” she said. “People think bones are the difficult one, but bones heal and heal really well unless you shatter them, which is really rare. It's the ligaments and soft tissue damage that’s the hardest to get over."

Even though Homicide estimates that a little under half of bank-track skaters will have some kind of injury if they roll for more than a year, career-ending injuries are rare. That’s not why most of the skaters that leave wash out: and, she added, "It's not lack of skills. If you try pretty hard and have any athletic ability, you can get through training classes. It's people who don't have the time to commit.”

It’s a big commitment: Two training sessions a week, plus team sessions, plus management and organization (Homicide herself trains new recruits). All that practice has paid off in faster skating: But there’s been a downside. Faster packs have meant pivots are moving even quicker to get ahead of them. Rather than controlling the pack, she argues, they’ve become another accelerator, making life even harder for the jammers.

“There's only so fast a human being can skate," she said, and that’s been reflected in dropping scores. This year’s championship score was 18-14, she said, "and that was the lowest scoring game I've ever seen. Last year's championship was 23 to 27, and that was just an abomination, but this year was crazy […] I don't think packs should go that fast: It's harder to block and it's harder to stay together."

This all means endurance becomes even more of an issue – and she noticed that even the most experienced and fittest players were having trouble by the end of the second half in the championship. That's one things she hopes that can be fixed somehow before the regular 2009 season kicks off in February. “We overhaul our rules every season,” she said, “and I think that's something big we'll address." 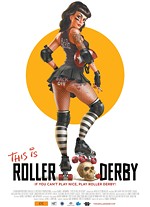