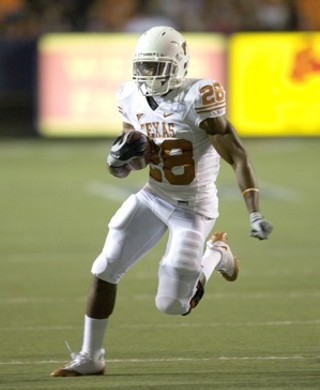 The most Texas sounding of all Longhorns apologized Monday. Not for the nonexistent pass defense against lowly UTEP, but for drunken driving. "It's not how I was raised," Lamarr Houston said of the drunk driving arrest that kept him from traveling to scenic El Paso for a game that mercifully ended at 12:51pm Sunday morning with a 42-13 notch in the UT belt.

When I was a kid, my brother and I would stay up until the wee small hours playing Mille Bornes, a card game about driving that only the French could come up with. Driving? Cards? No wonder these people eat snails. Anyway, I was the Mille Bornes wizard without even trying or caring. I had the French mojo. My brother's strategy for winning was to keep me playing until I was half asleep.

Is that the Longhorn excuse for a game that shouldn't have been nearly as close as it was in the first half?

Am I the only one who is seeing last season replay in his head? The little guys go pass happy on the Horns, who eventually wake up and shut this nonsense down. Good thing next week's opponent Arkansas is down on its luck and beat the University of Louisiana-Monroe by one point last week. Some may not remember that the Razerbacks and the Horns were once bitter rivals. Surely you can't forget the classless Houston Nutt (aptly named and now at Mississippi) sporting the "down Horns" sign after beating then No. 5 Texas 380-28 in DKR-Memorial Stadium in 2003. This year, Texas goes into the game No. 8. Shudder.

OK, here's what looked good in El Paso: Freshman Fozzy Whittaker rocked and looks to be the future of the UT running game. He got 72 yards on 12 carries and looked electric. Colt McCoy threw his first interception of the season, but he also threw four touchdowns to four different receivers. And the game was on so late that much of America didn't notice the chinks in the Longhorn armor. Let's hope they heal before that Dallas dance with OU.