Local runners, jumpers, and throwers do well in Eugene 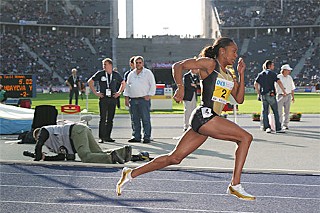 I just spent an amazing week and a half in Eugene, Ore., watching the U.S. Olympic Track & Field Trials. As a rabid track fan, I'm still dizzy from the experience – the University of Oregon's Hayward Field is an historic track stadium, the sport's equivalent of Yankee Stadium or the Rose Bowl, and this was my first trip to a national championship meet.

A quick roundup of how Austin/UT athletes fared (A finish in the top three, provided the athlete meets Olympic qualifying standards, guarantees a spot on the American team):

Leonel Manzano, 1500 meters, 2nd place This event summed up what makes America great: None of the three athletes making the team were born in the United States. Winner Bernard Lagat won the 2004 Olympic gold for his native Kenya, but then became an American citizen. Manzano, a two-time NCAA champ for Texas, was born in Mexico but grew up in Marble Falls. And third-placer Lopez Lomong is a refugee from the violence in Sudan.

Trey Hardee, decathlon, 2nd Broke the NCAA record for the 10-event sport while at Texas.

Marshevet Hooker, 200 meters, 3rd Former Longhorn NCAA champ qualified in dramatic fashion, tripping at the finish line but still crossing .01 of a second ahead of the fourth-placer. She also placed fourth in the 100, missing a team spot in that event by .03, despite clocking the best time of her life.

Austin's best hope for a gold medal. Plagued by illness last year, she placed fourth at nationals and thus didn't make the U.S. 400 squad for the world championships. Other than that, she had a sterling 2007 and ended the season ranked No. 1 in the world. Now she seems ready to win the big one.

Another former NCAA champ for the Horns; her father is 1984 Olympic silver medalist Michael Carter.